You won’t believe how easy this Instant Pot ham recipe is. All you need is a few ingredients to make a low-carb holiday ham with a sugar-free keto glaze. 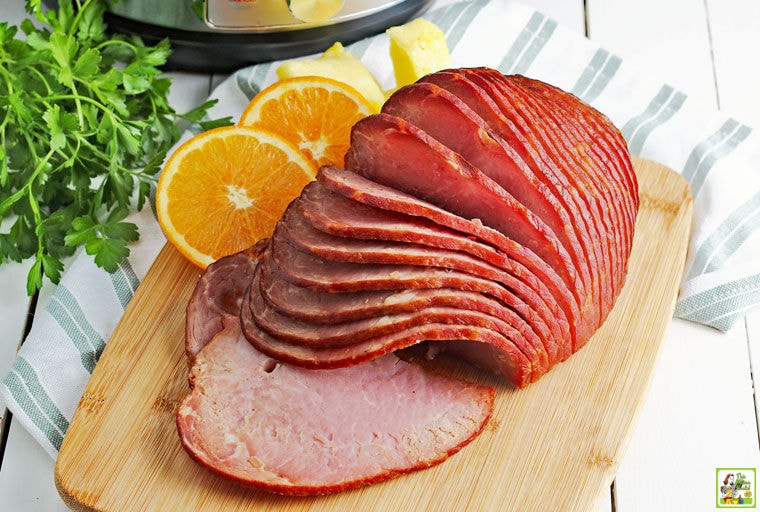 This keto ham recipe comes with three fantastic ways to make an easy-to-make homemade sweet glaze for any holiday meal.

Ham is perfect for low-carb diets and is usually 1-2 grams carbohydrates per serving. However, it’s the glazed ham that you have to avoid.

Luckily, for those on a keto diet, you can make a sugar-free coca-cola glaze that is low carb and keto-friendly for the holiday table.

However, if you’re not on a low-carb diet, you can use either the brown sugary glaze or the maple syrup glaze.

What kind of ham should I cook in my Instant Pot?

If you’re cooking a spiral ham in the Instant Pot, you should buy a precooked and cured ham at the grocery store. This is also called a “city ham” and is the best ham to use in this recipe.

A spiral cut ham is a type of city ham that differs from “country” or fresh hams, which aren’t precooked and cured.

Bone-in or boneless? You can choose either boneless ham or bone-in ham. Boneless hams are much simpler to carve. But the bone within bone-in hams provides more flavor and texture. (You can also use the leftover ham bone in split pea soup.)

You can use either bone-in or boneless in Instant Pot ham.

Shank-end or butt-end ham? Butt-end hams are fattier and are usually cheaper. I think they make for a juicy ham, probably due to all that fat, go figure.

Shank-end hams are leaner and easier to carve. However, they may be more expensive. Both types of holiday ham will work well in your Instant Pot.

Read this if you're wondering why your Instant Pot isn't heating or working. 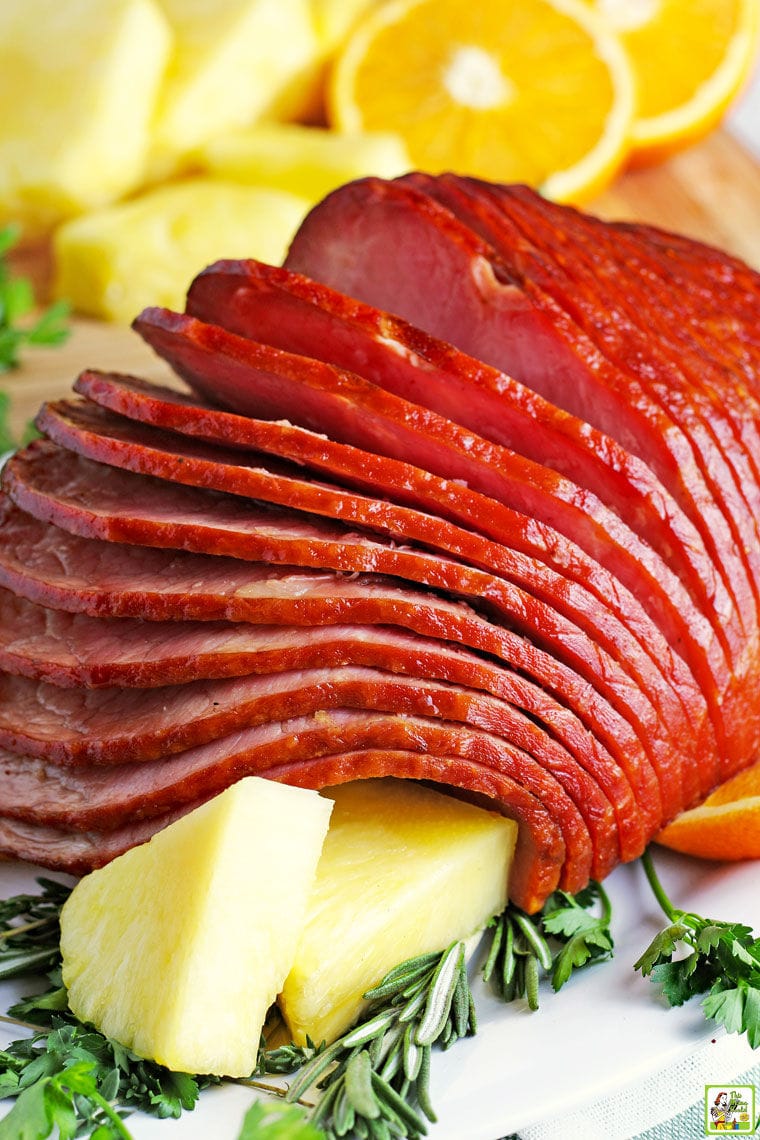 How much should the ham weigh?

This is a crucial step when cooking a Christmas holiday or Easter ham in an Instant Pot! The size of your Instant Pot will determine how big a ham can fit inside.

● An 8-quart Instant Pot holds a larger ham, up to 8 pounds.

Plan on about 1 pound per person for the meal, and you should have more than enough.

Cooking a ham in an Instant Pot

Cooking a ham in an Instant Pot is slightly different from prepping it in a slow cooker or crockpot. However, it’s still a lot easier than using your oven.

It’s also a speedy process. It’s almost impossible to dry out the ham in an Instant Pot, so long as you follow these directions! 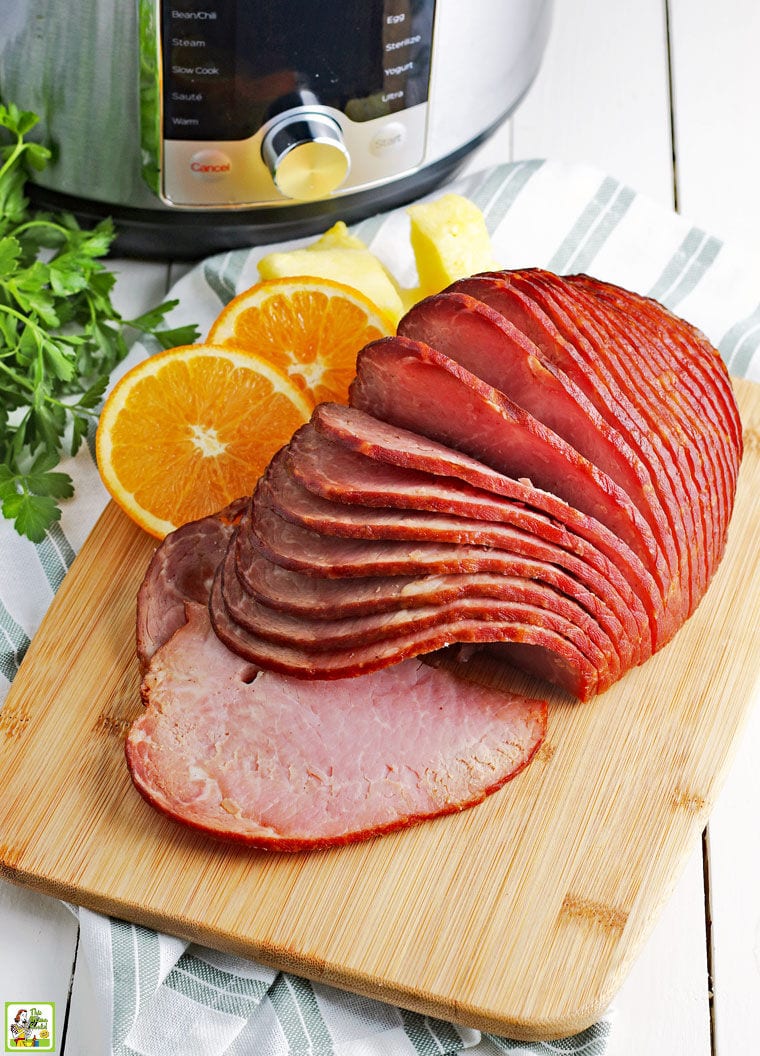 What equipment do you need?

Here’s what you’ll need to make your Instant Pot recipe a success:

● An Instant Pot. Make sure it’s big enough for your ham, as stated above.

● A meat thermometer. Not entirely necessary, but extremely helpful to measure whether or not your pressure cooker ham is done.

● Aluminum foil. You’ll use this to keep the ham’s moisture in, as well as to pull the ham out of the Instant Pot by using it as a sling.

How to cook a ham in an Instant Pot:

Using your pressure cooker is the best way to save on oven space during holiday cooking. This is so delicious that you’ll never order an overpriced honey-baked ham for your holiday meal again.

1. Place the trivet in the Instant Pot’s inner pot.

2. Place a piece of foil to act as a sling at the bottom of the trivet.

3. Wrap the ham in aluminum foil, creating a bowl shape around the meat.

5. Finish wrapping the ham in foil and place it at the bottom of the Instant Pot.

6. Use the “Pressure Cook” setting on High pressure to cook for at least 10 minutes plus 2 minutes per pound.

The cook time for a 6-pound ham is 10 minutes + 12 minutes, so 22 minutes. Remember, there’s additional time for the Instant Pot to come up to pressure.

7. After cooking the ham, do a Natural Release. This can take up to 30 minutes.

8. Remove the lid. Check that the ham reached an internal temperature of 145°F.

9. Remove the ham from the trivet using the foil sling.

10. Serve immediately with your favorite side dishes. 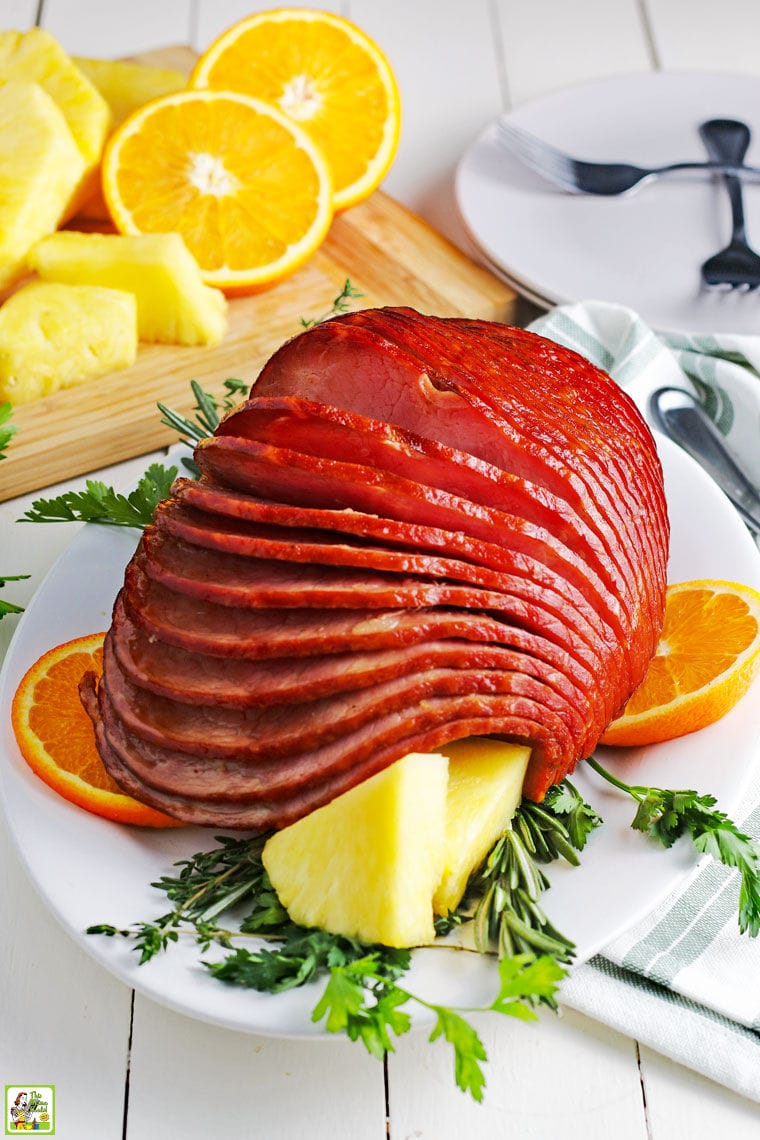 Can I cook a spiral ham in a slow cooker?

Yes, you can with this Easy Crockpot Spiral Ham Recipe!

It's a Slow Cooker Ham without Brown Sugar recipe that uses a beer, chutney, and Dijon mustard glaze. It's such a family's favorite ham recipe that I make it several times a year.

You can make this crockpot ham recipe gluten-free with a GF beer, hard cider, or apple juice.

Got a pellet-smoker grill? Try this Traeger Smoked Ham Recipe.

Best side dishes and desserts to serve with spiral ham

Serve the ham with these low carb and keto-friendly holiday recipes like:

For more ideas check out the Best Side Dishes to Serve with Ham Dinner.

Serve this ham recipe at Sunday afternoon sports watching parties, brunches, and other special occasions, too! 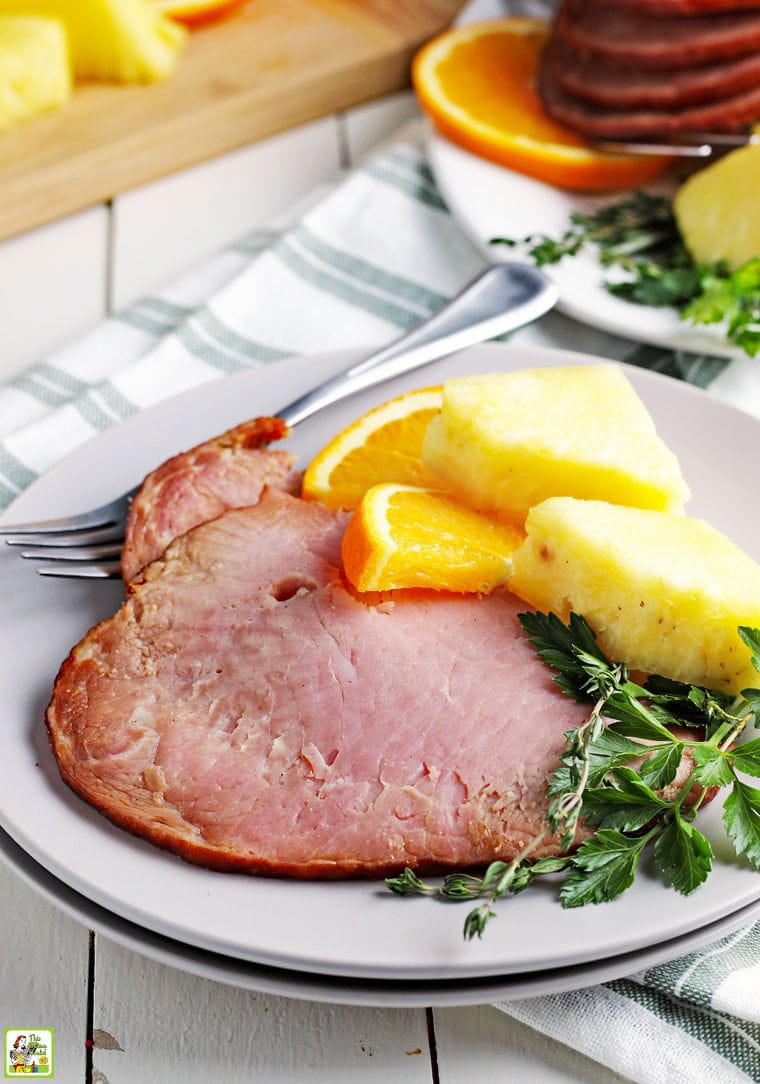 What to do with leftover ham

Wonder if you can freeze ham? Here’s the best how-to guide on freezing ham!

Keep any leftovers in an airtight container in the fridge. Here are some ideas of what to do with leftover holiday ham:

● Serve the sliced ham on hamburger buns with some keto-friendly BBQ sauce.

● Make ham and eggs, omelets, and a quick and easy quiche.

● Use the leftover ham in breakfast casseroles, bean soup, and this Mac & Cheese Casserole Recipe with Peas, Carrots & Ham.

What’s your favorite way to use leftover ham?