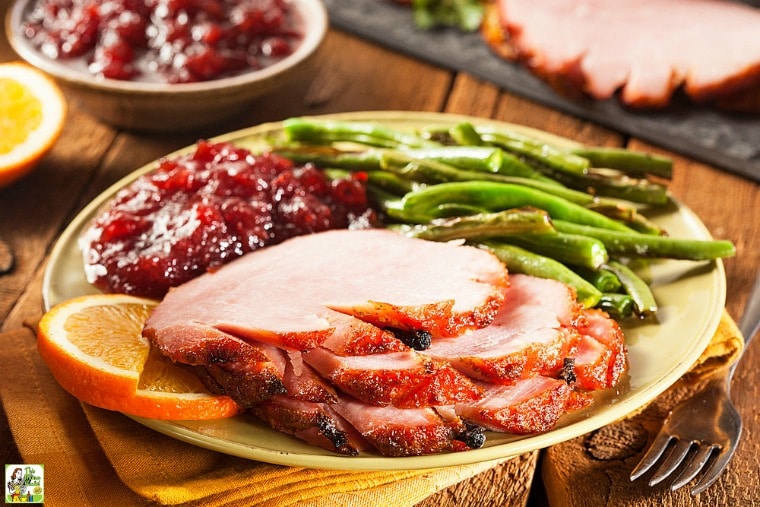 You have to try this Crockpot Spiral Ham with Beer and Chutney Glaze for the holidays!

You don’t have to be an expert in the kitchen to make this fantastic ham for any holiday or special occasion.

I've been making a version of this slow cooker ham since 2004.

The secret to this crockpot ham recipe is its spicy beer and chutney glaze.

My kids insist that I make it every Thanksgiving and Christmas, which I do because they won’t eat any of the turkey I make. 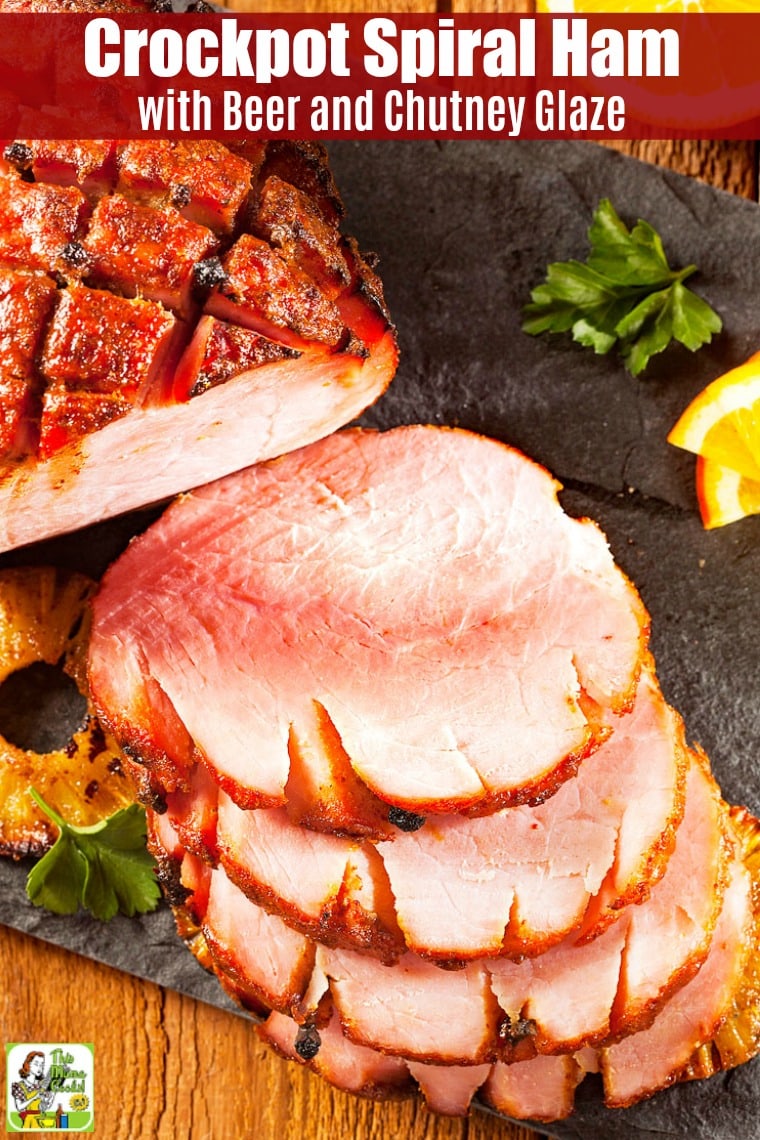 Making a slow cooker ham recipe is a great way to free up your oven during big cooking holidays like Thanksgiving.

I love cooking it because it's a super easy crock pot ham recipe since it’s pretty much dump and go. (Well, dump a couple of times.)

Spiral cut ham in crock pot is also great option for any holiday you don't want to spend all your time cooking. (Or when you’re super busy cooking other dishes.)

That's because this spiral ham is already precooked and pre-sliced. It just needs to be heated up and given a bit of flavor in your slow cooker.

The spin to cooking ham in crock-pot is creating a spicy beer glaze that’s an easy and more wholesome alternative to the scary sauce packet that comes with your ham.

(I just toss that packet of weird stuff out!)

There are many terrific gluten free beers and ciders on the market these days that are available at your supermarket or liquor store. Just ask a clerk for help finding them.

Don’t drink? If you don’t drink alcohol, regular cider or apple juice is a delicious and wholesome substitute. And naturally gluten free as well.

You'll probably have plenty of leftover ham for sandwiches, ham and eggs, omelets and quiche. I also love cold leftover ham in salads. 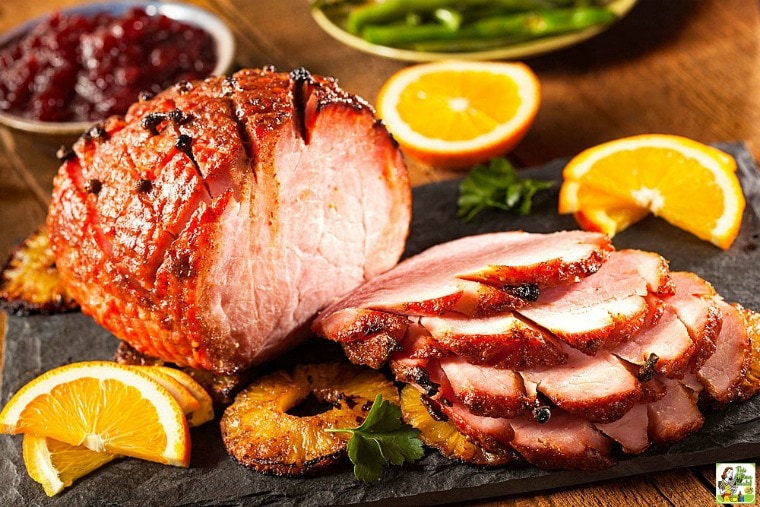 How big a slow cooker? You need to make sure that your slow cooker is big enough – or your ham small enough – to use the lid.

I have an 8-quart slow cooker and try to find a ham that’s big and wide but flat.

If your spiral cut ham doesn’t quite fit your crockpot, you can cover the top with several sheets of heavy duty aluminum foil. Just make sure to get a good seal so all the heat and moisture stays inside your crock.

Or you can trim your ham to fit it. Place any trimmed bits into the sides of your slow cooker.

You an also use the trimmed ham in another dish or for lunch. (Remember the ham is already cooked and can be eaten right away.)

Chutney: If you cannot find chutney at your local supermarket, use a cup of mild mango salsa plus a cup of peach or apricot preserves. Should be just as tasty!

Using a rack: I use two small 6” round cake racks at the bottom of my slow cooker so the ham doesn’t stick to the ceramic crock insert.

Easy cleanup: Instead of the roasting racks, and for easy crock-pot cleanup, you can use slow cooker liners instead. They’re WONDERFUL.

Now that I use liners, I no longer have to soak my crock-pot overnight and scrub it with a scouring pad in the morning.

I just rinse my slow cooker insert when I’m done cooking. Then I dry it with a kitchen towel, and put it away until next time. So easy!

Buy ham on sale: During the various holidays when spiral cut ham is on sale, buy an extra one to freeze for later. That way you can use this spiral ham crockpot recipe during the summer when it’s too hot to use the oven to cook. 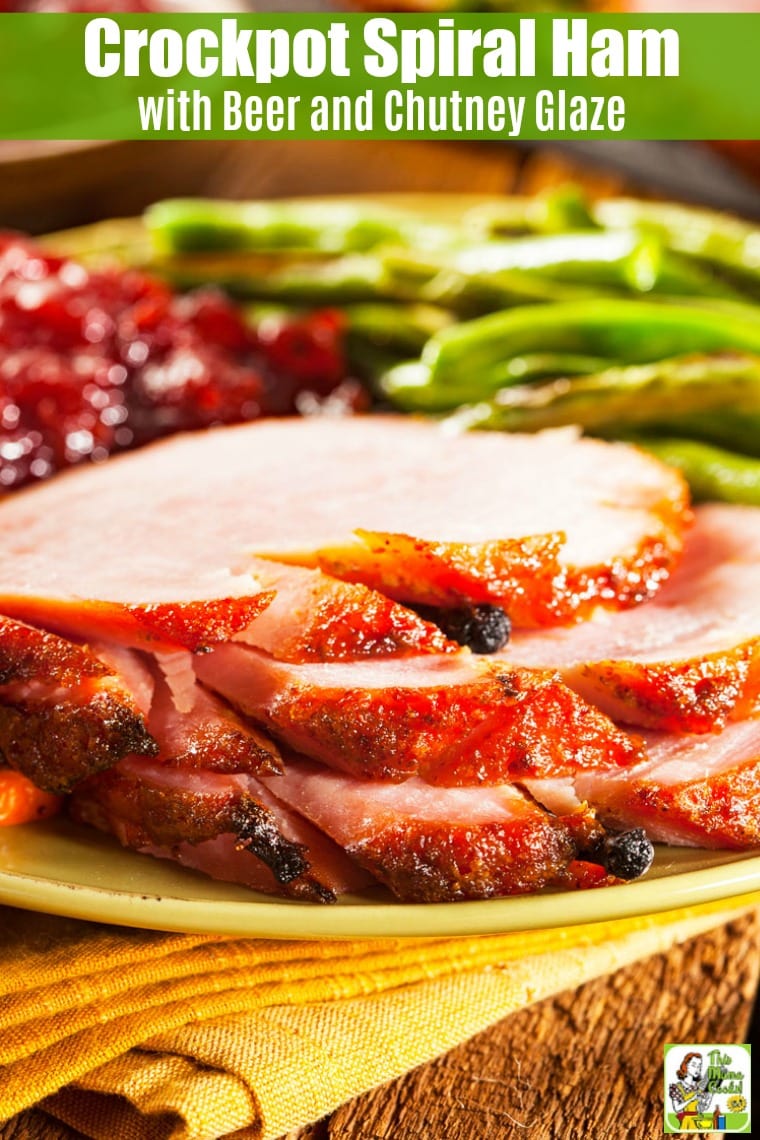 Side dish suggestions to go with slow cooker spiral ham