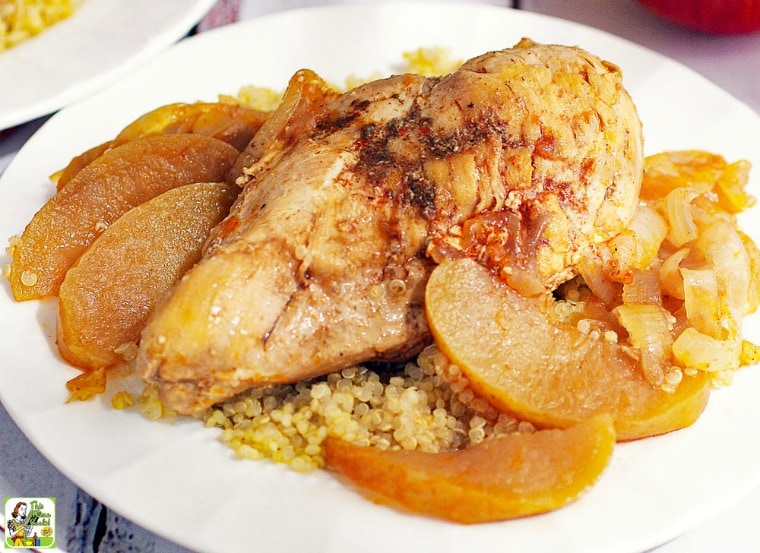 You have to make Chicken Normandy if you love French chicken recipes.

This is my mother's version, so I call it Chicken Normandy à la Marie-Celine.

(Her French name is Marie-Celine. When she came to America in 1960, she changed it to Marilyne.)

My French mother is a fabulous cook. Her chicken Normandy recipe was one of her traditional French dishes that I requested as much as her beef bourguignon and chocolate mousse. 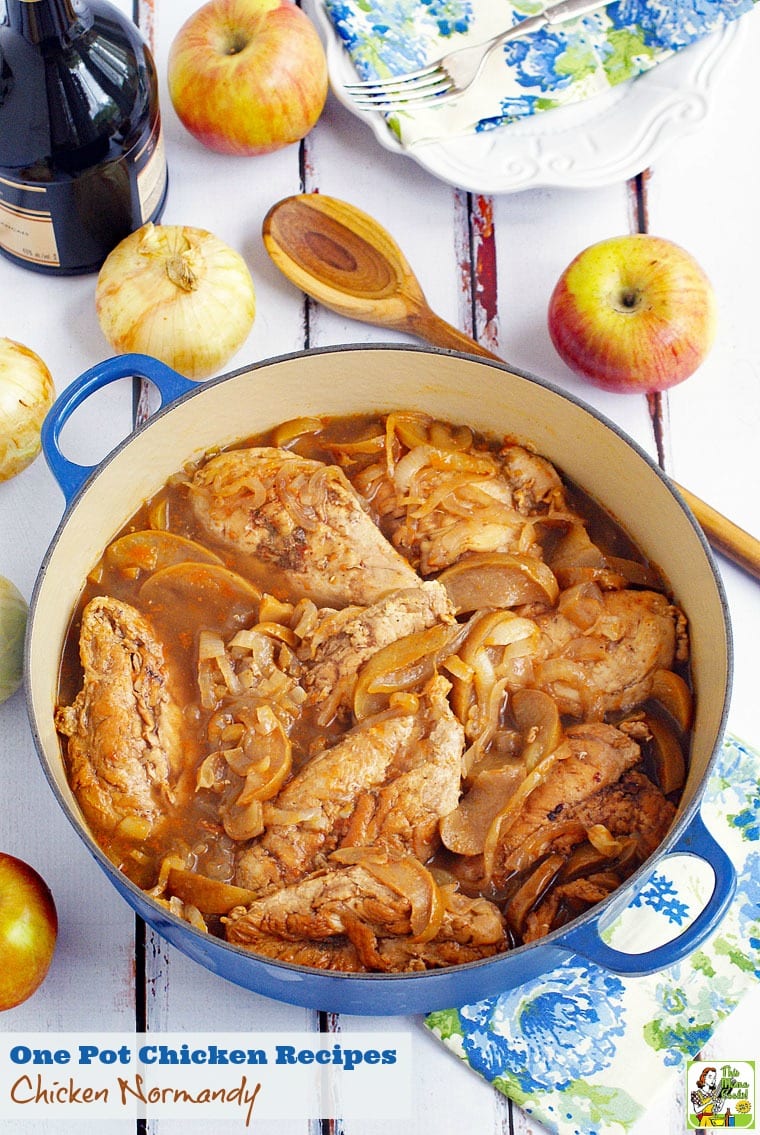 What is chicken Normandy?

Chicken Normandy traditionally uses apples, brandy and a cream sauce. It’s named for the Normandy region of France, where Normandy apples are grown and brandy is made.

My mom always made a healthier version of the traditional chicken Normandy recipe as my dad avoided cream sauces due to his sensitive tummy.

I’ve gone one step further by substituting a buttery spread instead of butter, since I avoid whey. But you can use real butter if you wish. 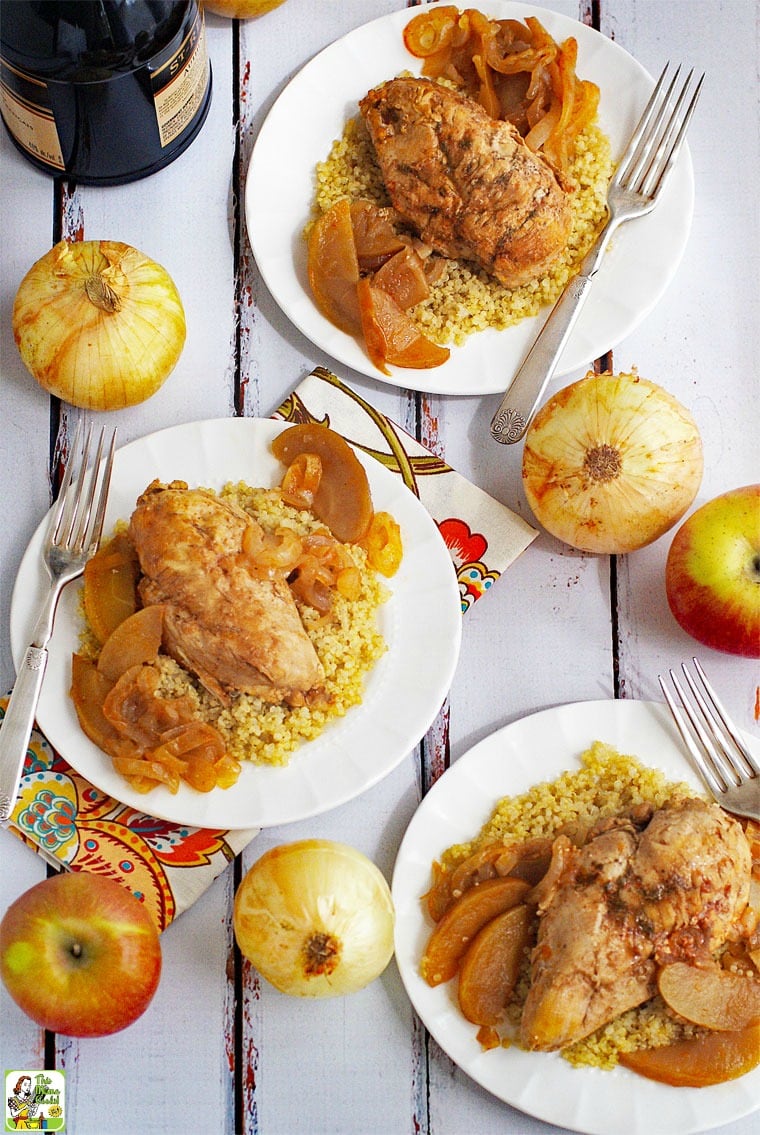 What type of chicken?

My mom always used chicken thighs with the bones in and the skin on.

It was always a chore to peel off the skin when eating. And us kids found it kind of yucky to deal with the skin and bones.

Instead, I decided to use chicken breasts in my Chicken Normandy à la Marie-Celine instead of thighs. I feel that cooking skinless chicken is better as it cuts back on fat and calories. Plus, it takes less time.

However, chicken breasts can sometimes be dry and not as tasty. So don’t cut back on the smoked paprika, poultry seasoning, or the brandy.

Can I use chicken thighs?

You may wish to use skinless and boneless chicken thighs instead.

They’re a little tastier than chicken breasts, though not as lean.

Whatever type of chicken you decide to use, just chose skinless and boneless.

What type of apples

I used Fuji apples, which I cored and thinly sliced.

You should use any apple that’s good for cooking or baking such as:

I don’t drink. Can I leave out the brandy?

For this one pot chicken dish, I used the traditional brandy since it adds a wonderfully unique flavor to the dish.

However, if you want to avoid alcohol, you can use apple cider or apple juice instead. 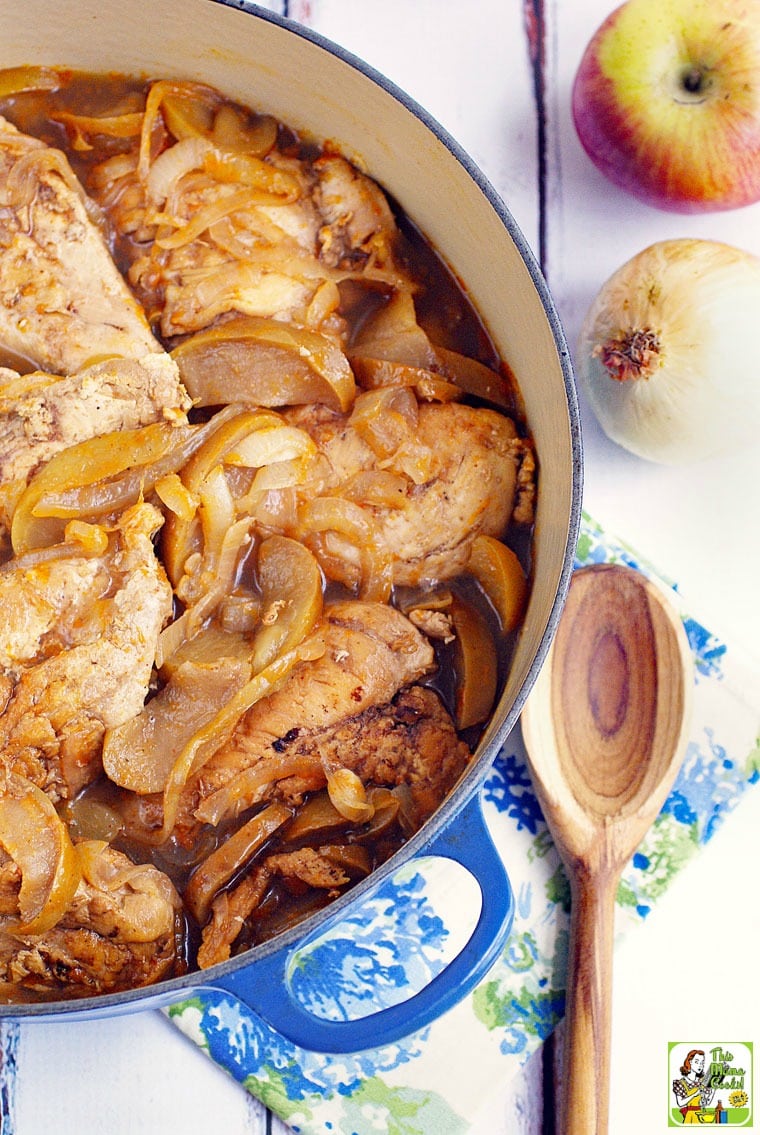 What type of Dutch oven?

For you’re fans of traditional French cooking, indulge yourself in a 9-quart Le Creuset Round French (Dutch) Oven if you have the funds!

Lodge is a terrific American brand and will work on any stove including induction cooktop stoves.

If you don’t have as large a Dutch oven for your one pot chicken recipe, you have a few options:

You can divide the recipe in half and cook it in two 4 1/2-quart Dutch ovens. Adjust the cooking time accordingly.

Don’t own a Dutch oven?

If you don’t own a Dutch oven, cook up the chicken in a skillet.

Then scrape off any of the brown bits and put the chicken, onions, apples, seasoning and brandy in casserole dishes.

(Divide the seasoning and brandy depending on how many casserole dishes you’re using.)

Cover the casseroles with foil and cook. Adjust the cooking time accordingly.

Or cook chicken Normandy in a heavy pot

If you don’t want to invest in a Dutch oven, you can cook the chicken Normandy recipe in a heavy, oven safe soup kettle or pot.

Make sure the lid of the soup kettle is oven safe, too. If it isn’t, you can cover the pot with a couple of layers of heavy aluminum foil instead.

Serve the chicken at the table in a couple of large decorative bowls, if you wish. 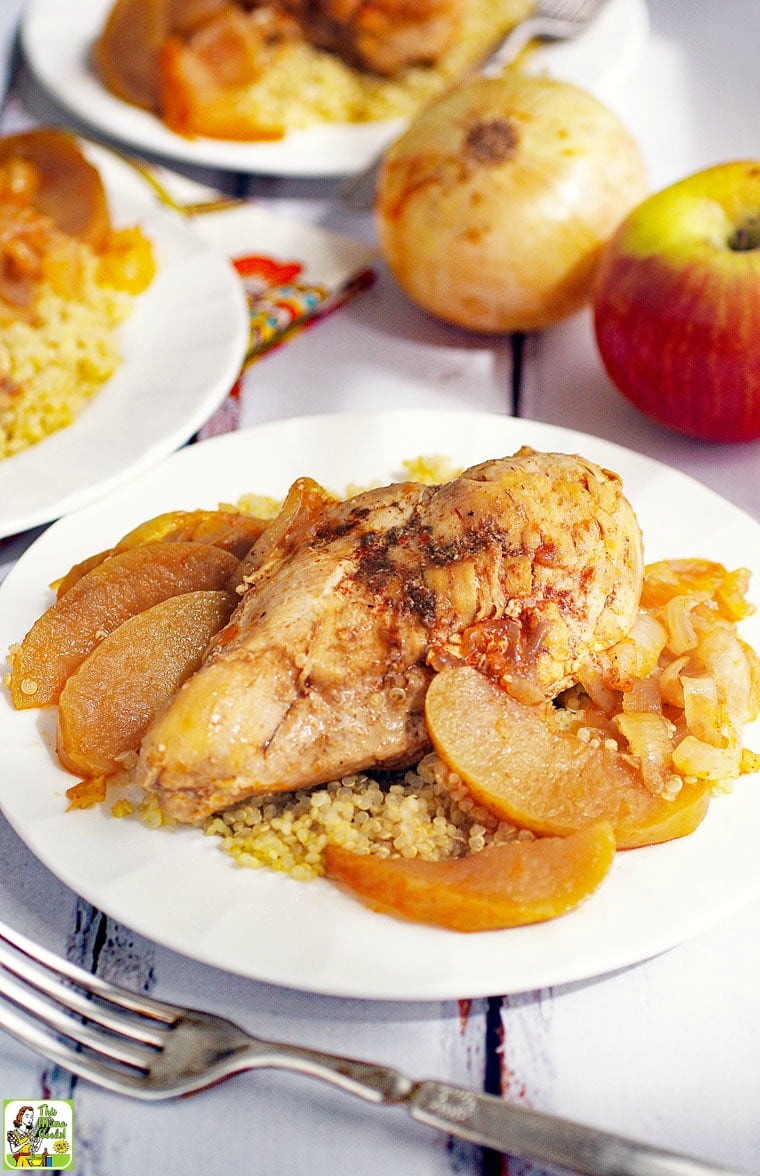 How to serve the chicken Normandy

This recipe for chicken Normandy is naturally gluten free and dairy free. To keep it so, serve it on the following:

Prepare the rice before you cook the chicken

If you’re serving Chicken Normandy à la Marie-Celine on rice, make sure to get your rice going in your rice cooker before starting your one pot chicken dish.

Don’t have a rice cooker? You MUST get one. Such a time saver and your rice comes out perfectly every time.

I have an amazing fuzzy logic rice cooker. You can also steam dumplings and do a million other things in it, so it’s worth the investment.

If you’re looking for more chicken recipes for dinner, check these out:

Slow Cooker Chicken Adobo Recipe with Quinoa is one of my family’s favorites.