Are you looking for a maple syrup substitute? Here are the best substitutes for maple syrup to use in cooking and baking and to use on your favorite breakfasts and desserts. 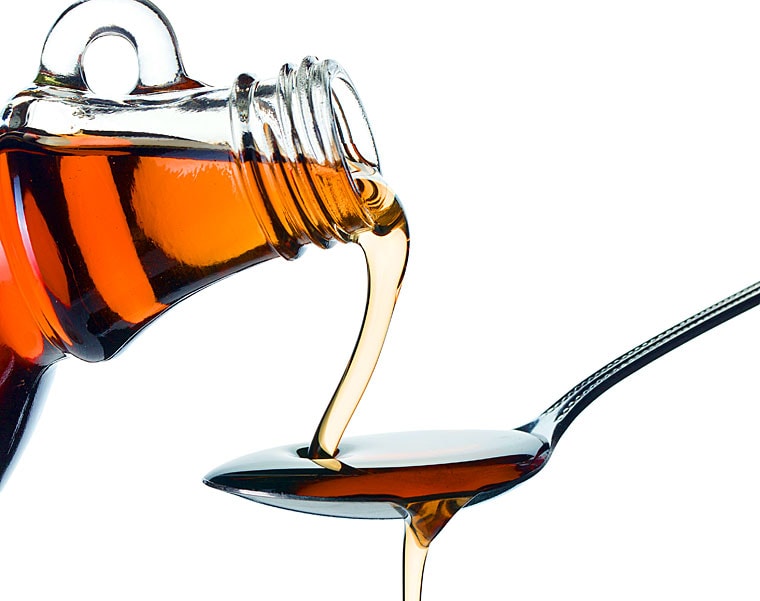 Have a recipe that calls for delicious maple syrup, but you don’t have any on the shelf?

Don’t want to pay for a bottle when all you need are a few tablespoons? With the price of real maple syrup, I can’t blame you!

Or maybe you’re looking for a low-carb, keto-friendly version.

That’s why it’s essential to look for a common alternative to maple syrup and some more unusual ones.

So what is maple syrup?

Pure maple syrup is produced from sugar maple sap cooked down until most of the water is boiled off. This results in a rich, thick syrup.

There are four grades. The darker the syrup, the stronger the maple flavor. 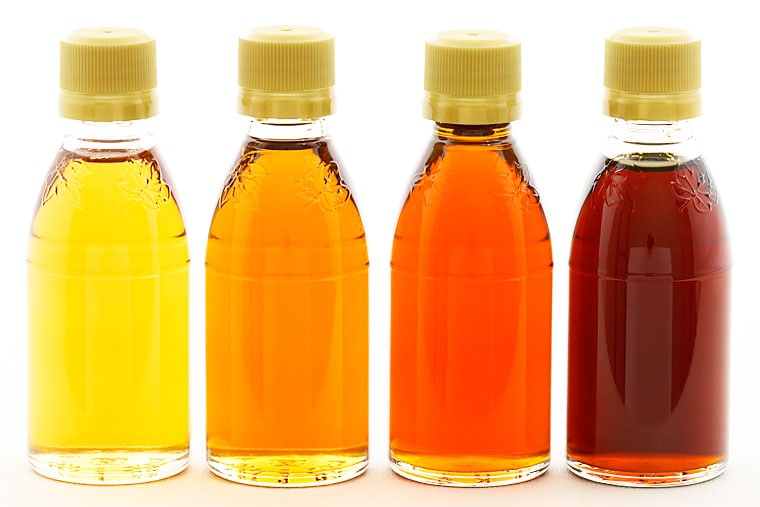 Golden: This is the lightest and recommended for drizzling over waffles, pancakes, French toast, and ice cream.

I love using it in my Bacon Maple Cupcakes Recipe with Chocolate and in a glaze for my Easy Instant Pot Ham Recipe.

Amber: Use this delicious syrup in cooking and when baking up some maple cookies.

Dark: Use in recipes that require a heavy maple flavor.

Very Dark: Use this as a substitute for molasses or when making maple-flavored candies.

Can I use maple syrup alternatives in cooking and baking?

However, any of these may alter your recipe’s taste, color, or texture. If possible, add a bit, then taste.

When baking, this is hard to do, so keep your fingers crossed that your recipe turns out.

Next time you bake, you may need to add more a less. So experiment a bit and be prepared to make a few batches.

Also, if you’re adding a cup of maple syrup vs. just a few tablespoons of real maple syrup, use a good substitute in your easy recipe.

But in the end, any great substitute should work.

Looking for keto pancake syrup or a low-carb maple syrup substitute to use in your recipes?

Give these a try! Many of these are made with natural sweeteners.

If you’re not counting calories or carbs, the best substitute for maple syrup is pancake syrup. Some people call this table syrup.

Plus, it’s a cheaper alternative and something you may already have in your pantry. 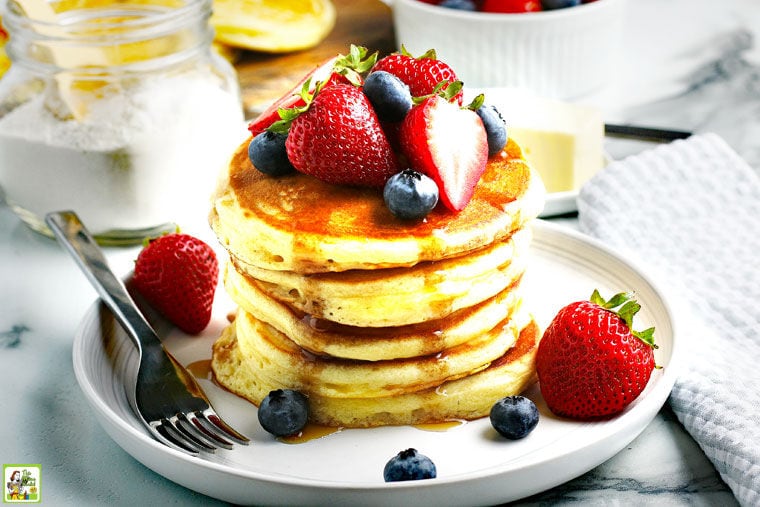 Pricewise, honey may be just as expensive as maple syrup. Especially if you’re buying a locally sourced product.

Honey is thinner and not quite as sweet. Some people suggest adding brown sugar to it. 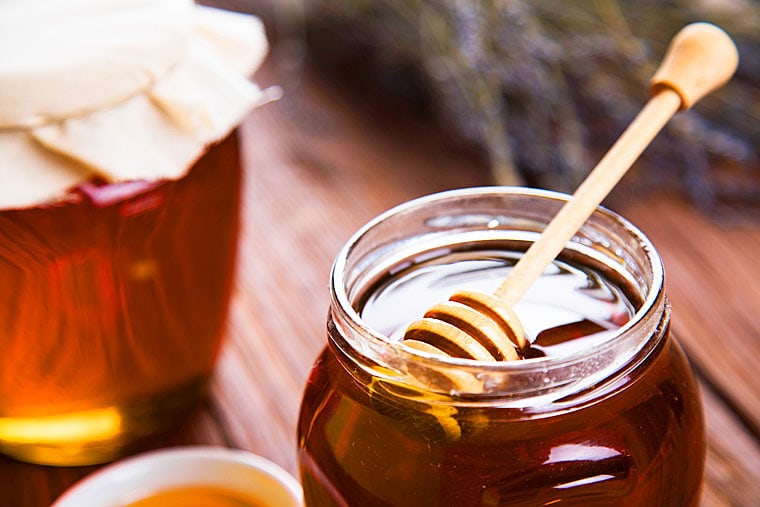 Note: Honey is not vegan.

Also, babies younger than one-year-old should not be given honey. Clostridium bacteria that cause infant botulism can be found in honey or processed foods containing honey.

Blue agave syrup is made from the blue agave plant. Other agave nectars are made from grey, green, or thorny agave plant varieties.

There are several grades:

Light: mild and suitable for cooking like in this Easy Coconut Macaroons Recipe

Amber: a medium-intensity caramel flavor that works in desserts, sauces, and savory dishes

Dark: good for pancakes and waffles

Most of us have molasses in the pantry. So this is an ideal substitute to use when needed.

Molasses is usually made from sugar cane or sugar beet juice boiled down to a syrup.

Confused about sulphured vs. unsulphered? Sulphured molasses is treated with a preservative that leaves it with a chemical flavor. It’s also less sweet.

Most commercial molasses is unsulphured.

Light molasses: Made from the first boiling of the cane or beet juice. It’s the lightest in color and sweetest, and mildest in flavor.

This is probably the molasses you’ll find at your grocery store, so most people use it in their baking and cooking.

Dark molasses: Made from the second boiling of the cane or beet juice. It’s thicker, not as sweet, darker, and stronger in flavor than light molasses.

Most people use this when making gingerbread recipes.

Blackstrap molasses: Also known as treacle, blackstrap is made from the final boiling of the molasses.

It’s thick, dark, and not sweet. Since it’s bitter, only use blackstrap molasses if a recipe calls for it. Some people like using it in cookies or like barbecue sauce.

Brown rice syrup is made by cooking brown rice and exposing it to natural enzymes. These break down the rice’s starches into sugars.

After filtering out the impurities, the result is a sweet liquid. Then this is boiled down into a thick, light brown syrup.

Brown rice syrup is not that sweet, so it may not be the best substitute to use in place of maple syrup. Many people find it less sweet than sugar, honey, or agave nectar.

Some manufacturers may add high-fructose corn syrup (HFCS) to their corn syrup, so read the label. 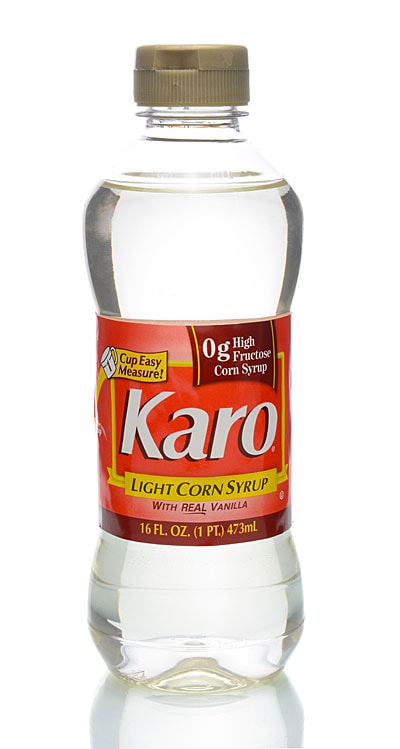 Brown sugar syrup is a homemade simple syrup made with two ingredients: equal amounts of dark brown sugar and water. (I usually use 1 cup of sugar and 1 cup of water.)

1. Put dark brown sugar and water in a saucepan.

2. Place the pan on the stovetop and bring to a simmer over medium-high heat. Stir to make sure sugar dissolves completely.

3. Simmer until syrup thickens to desired thickness. Make sure to watch the pan so you don’t have a boil over.

4. Take the pan off the stove and cool.

Caramel sauce is made with cream, butter, and brown sugar. (Or vegan substitutes like in my Vegan Caramel Sauce Recipe.) Don’t be confused.

Excellent to drizzle on desserts like Apple Peach Pie with Crumble Crust and ice cream. But it’s not for adding to your baking.

Boil either recipe down to thicken and use as a maple syrup substitute.

You can use “just” brown sugar in baking instead of maple syrup.

However, you’ll have to add more liquid to your recipe. Adding 1/2 the amount of maple syrup in water should suffice. 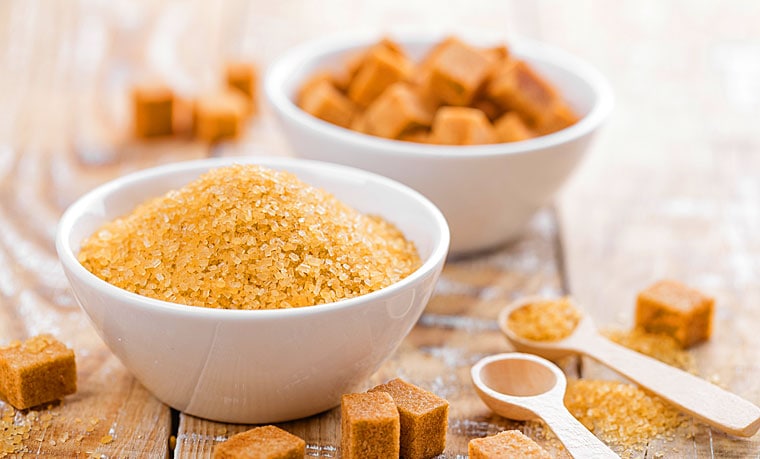 Though it has a different flavor, it looks and cooks up similar to honey.

If you’re British or have ever made treacle tart, Harry Potter's favorite dessert, you may be familiar with Lyle’s Golden Syrup.

You can buy Lyle's Golden Syrup on Amazon three ways:

If you want more of a maple taste, add a little imitation maple flavor.

Coconut nectar is made from coconut palm flowers. It’s similar to maple syrup or agave.

It also has a low glycemic index compared to other maple sugar substitutes.

Sorghum syrup is similar to light molasses or brown rice syrup. It’s made from using sorghum cane instead of beet cane or sugar cane.

It’s a staple of Southern cooking. You can use it in recipes like Crock-Pot Ribs Recipe with Balsamic & Sorghum, Easy Sweet Collard Greens Recipe, and Easy Bread Pudding Recipe with Whiskey Sauce.

If you’re a homebrewer, you’re familiar with malt syrup.

It’s medium to dark brown, thick, and very sticky. It has a “malty” and slightly sweet flavor, half as sweet as refined white sugar.

There are many varieties of malt syrup available at homebrew shops. So it can be confusing what to purchase.

Note: Malt is not gluten-free since it’s made from grains like barley or wheat.

What kind of cooking and baking with maple syrup do you like to do?