This bread pudding with whiskey sauce recipe is gluten-free and dairy-free. 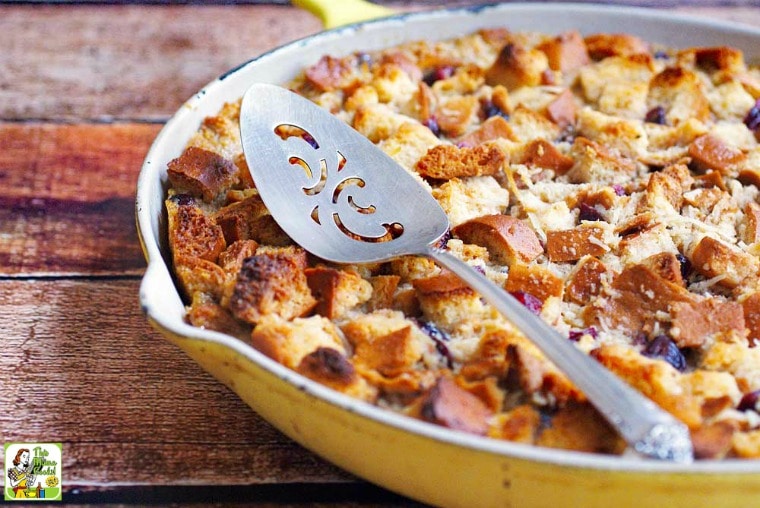 You have to try this easy bread pudding with whiskey sauce recipe.

Bread pudding is a super simple dessert to make. Plus, it’s very thrifty since you can use up stale bread or leftover dried fruit from holiday baking.

I find this simple recipe is the perfect way to use up those bread ends that no one seems to want to eat, too.

How to make bread pudding with whiskey sauce

Traditionally, many bread pudding recipes use rum, whiskey, or bourbon sauce. I used Chattanooga Whiskey that I bought on a trip to Tennessee.  Feel free to use your favorite brand of bourbon or Southern whiskey.

To make the best bread pudding:

1. In a large bowl, combine all ingredients and blend well. (Make sure the egg yolks are well beaten.) Let sit for 20 minutes so the bread absorbs the liquid.

Use the back of a spoon to push the bread into the egg mixture.

4. Bake the bread mixture for 50 minutes until set. The pudding is done when it is puffy and golden brown. Serve warm with the whiskey cream sauce.

To make the whiskey sauce:

2. In a small bowl, blend the cornstarch and 1/4 cup of whiskey to make a slurry.

3. Pour the slurry into the coconut cream and coconut milk mixture and bring it to a boil.

4. Reduce to low heat and simmer, stirring occasionally, for 5 minutes.

5. Remove the sauce from the heat, add the salt, buttery spread, and the remaining whiskey.

6. Serve the warm bread pudding with the whiskey sauce. 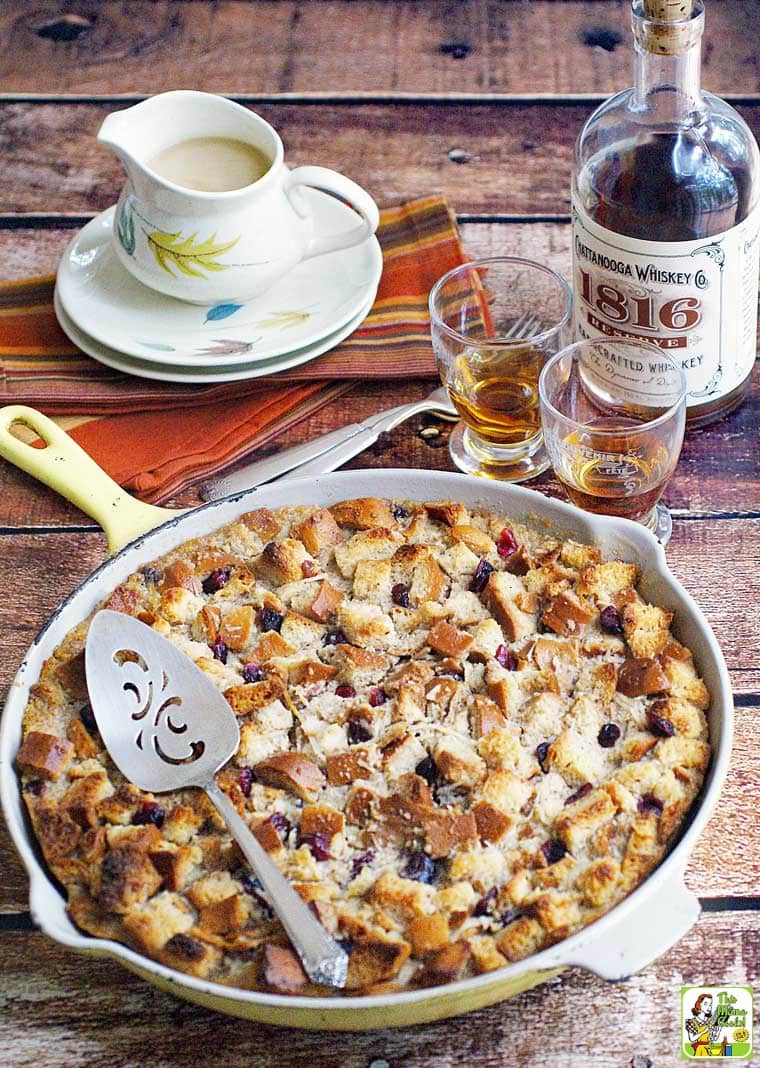 How to make gluten-free bread pudding

I used leftover gluten-free hot dog buns I had in the freezer. You can use any kind of gluten-free bread as I do in my Pumpkin Bread Pudding.

This recipe is a terrific way to use old bread or stale bread, too.

So If you have gluten-free recipes for other types of bread, use those.  (And if you’re not gluten-free, use whatever bread you like!)

How to make a dairy-free bread pudding

I made my easy bread pudding dairy-free by eliminating the heavy cream.

I used unsweetened coconut milk instead of milk since it goes well with the shredded coconut. Other options are unsweetened:

Finally, instead of butter, I used a vegan buttery spread like Earth Balance.

What kind of sweetener should I use?

I instead of sugar or brown sugar, I sweetened this recipe with sorghum syrup.

You can find this southern staple online or in beer and wine shops.

If you can’t find sorghum syrup, use real maple syrup instead.

Or try one of these 14 Best Substitutes for Maple Syrup instead. 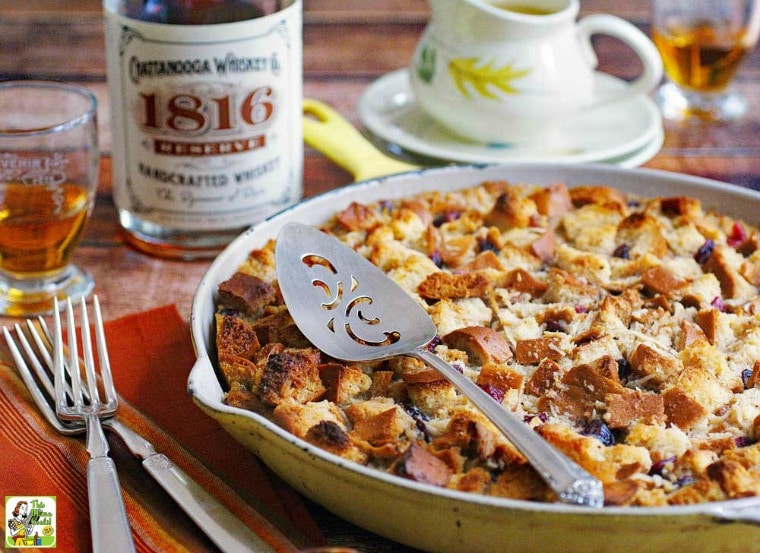 What else can I add to this bread pudding recipe?

Raisins: This is a recipe for bread pudding without raisins. Instead, it uses 1 cup dried cranberries.

But you can use 1 cup raisins or golden raisins instead if you prefer.

Soak raisins in hot water for 10-15 minutes until softened. Then drain through a fine sieve. Sprinkle raisins over the bread mixture.

Caramel sauce: You can drizzle some dairy-free vegan caramel sauce on the bread pudding instead of the whiskey sauce for those who don’t imbibe.

Cinnamon sugar: If you have some cinnamon sugar, you can sprinkle that on top of the bread pudding instead of the whiskey sauce or in addition to it.

You can use different types of “mix-ins” to make this Gluten Free Oatmeal Cookies Recipe truly unique.

These Gluten-Free Dairy-Free Pine Nut Cookies were inspired by a trip to the Grand Canyon.

For the bread pudding:

For the whiskey sauce:

For the bread pudding:

For the whiskey sauce:

Originally published on October 14, 2013. Updated with new pictures and information.