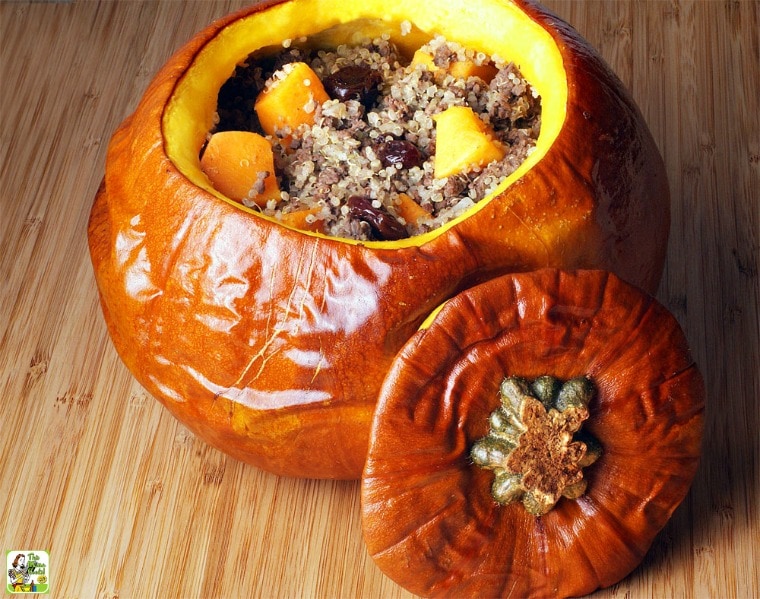 This Quinoa Stuffed Pumpkin Recipe with Venison, Cherries & Squash will be a show stopping recipe on your holiday table this Thanksgiving.

This stuffed pumpkin recipe was inspired by a recipe I saw in the Spirit of the Harvest: North American Indian Cooking cookbook – Hidatsa Stuffed Sugar Pumpkin.

I loved the idea of stuffed pumpkin with meat, rice, and vegetables with some salt and pepper.

However, instead of wild rice, I decided to use quinoa stuffed inside the pumpkin. (My kids aren’t crazy about wild rice for some reason.)

Then I decided to go all out and make this a baked stuffed pumpkin recipe with a mixture of ground venison, dried cherries, and butternut squash.

The result is a sweet and savory stuffed pumpkin recipe that’s impressive to look at but surprisingly simple to make.

Even better, not only is it one pot cooking, but you can eat the pot it's cooked in! 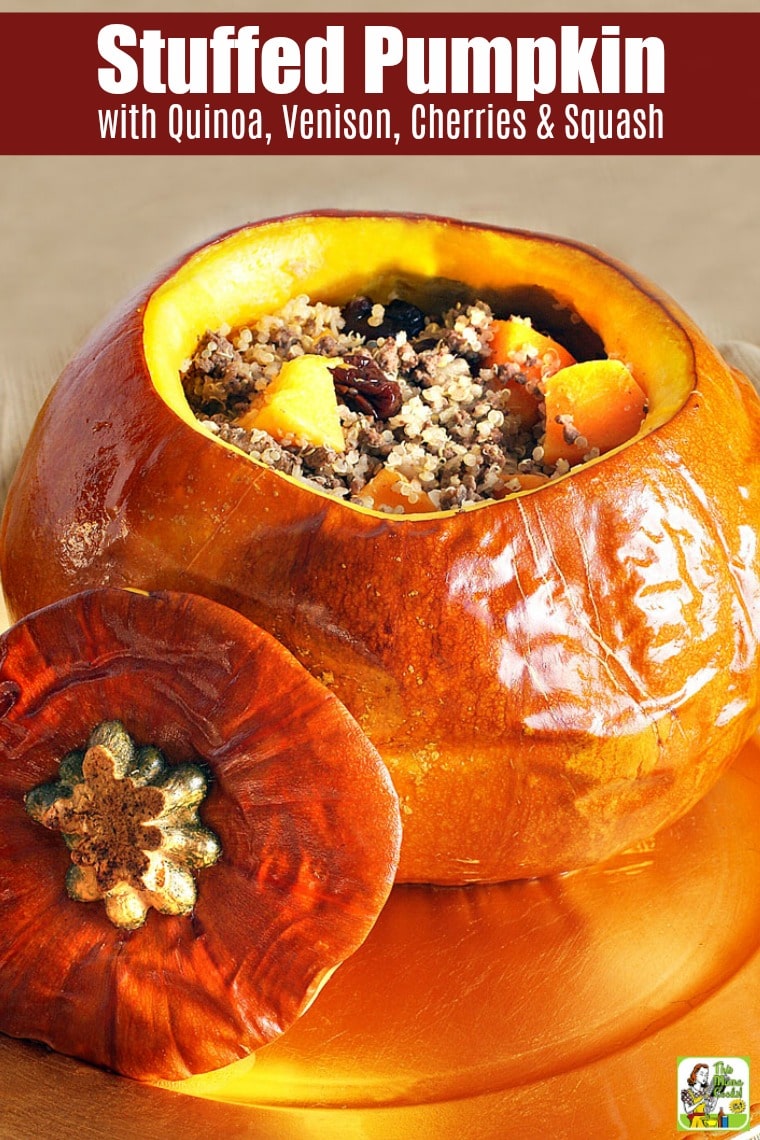 How to cook stuffed pumpkin

What type of pumpkin should I use?

Do not use a regular pumpkin. You know, the kind you use for Halloween carving and decorating. They’re too stringy and rather tasteless.

Instead, look for sugar or pie pumpkins, which are sweeter and more meaty. They’re usually smaller and can be found next to the squash.

There are many types of sugar or pie pumpkins. They go by the names Baby Pam, Autumn Gold, Ghost Rider (no, it doesn’t  look like Nicolas Cage), and New England Pie Pumpkin. There’s also a white pie pumpkin called Lumina.

There are also Fairy Tale and Cinderella pumpkins, which have thick skins, but delicious flesh for eating. There’s also the Blue Hokkaido squash, which is actually a type of pumpkin!

If you’re wondering what each variety looks like, check out online seed catalogs for the best pictures. All varieties will work well in this roasted pumpkin recipe.

Remember to pick a large pumpkin for this recipe as you’ll be stuffing it with a lot of goodies!

Do I have to use venison?

For this meat stuffed pumpkin recipe, you can use ground lean beef, ground turkey, or ground buffalo instead of ground venison.

You can even make this a sausage stuffed pumpkin recipe. (After all, who doesn’t love sausage?) I recommend a lean turkey or chicken sausage to keep the recipe as wholesome as possible.

Make it vegetarian or vegan

It’s easy to adapt this into a vegetarian or vegan stuffed pumpkin.

Just leave out the ground venison and double the quinoa, squash, and cherries that you’ll place inside the pumpkin. Or you can use veggie crumbles instead of the venison in this roasted pumpkin dish.

Also, make sure to prepare the quinoa with vegetable broth or salted water and not chicken broth. (Some people forget, you know?)

Instead of quinoa, you can substitute farro, brown rice, whole wheat tabbouleh, or wild rice. However, note that farro and tabbouleh aren’t gluten free.

Also, some folks don’t like quinoa because they think it’s bitter. That’s because you must rinse it before cooking.

Rinsing removes quinoa’s saponin coating, which is what gives it that bitter taste. Give it a try! You’ll notice a big difference.

Also, cook your quinoa in vegetable broth and add a little salt and pepper to the broth. All will give it a nicer flavor.

Not enough room in the pumpkin?

If there’s too much quinoa and meat stuffing, any extra can be put into a casserole dish and baked alongside your stuffed pumpkins dinner.

Cover the top of the pumpkin with foil and add some water or vegetable broth to keep the pumpkin stuffing extra moist.

You may find that you have a lot of pumpkin (not stuffing) left over, especially if your kids gobble up the venison and quinoa, and won’t touch the pumpkin, like mine tend to do.

If that’s the case, peel off the skin off the sides and top of the pumpkin. Then cut the pumpkin up into chunks.

You can then serve the reheated pumpkin with a little bit of grated Parmesan cheese as a side dish.

Or you can add the pumpkin chunks to soups, chili, and stews. 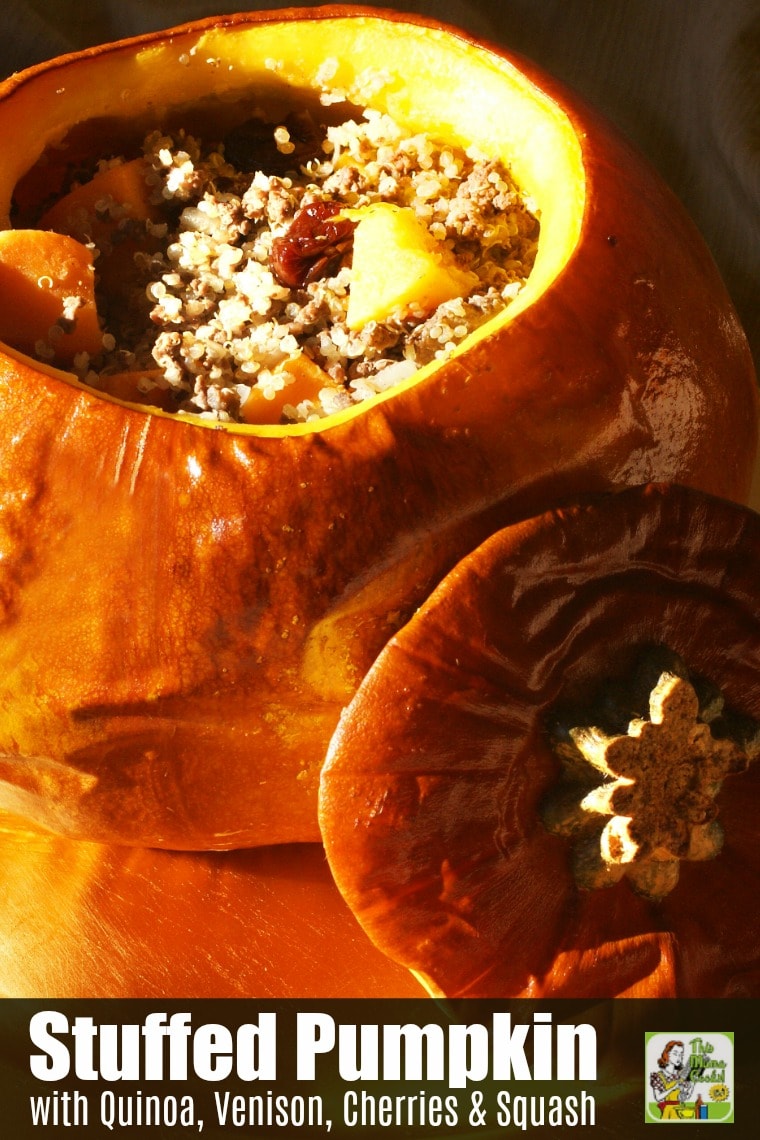 Not only is this baked stuffed pumpkin delicious, it’s also good for you!

Quinoa – Is one of the few plant sources considered a complete source of protein. Quinoa’s also a good source of dietary fiber, magnesium, anti-oxidants, and iron.

It’s also gluten-free and ideal for serving with a favorite side dish like Slow Cooker Chicken Adobo and Shrimp Puttanesca.

Cherries – According to the Cherry Marketing Institute, compared to other fruits, tart cherries have among the highest levels of disease-fighting antioxidants, and contain 19 times more beta carotene than blueberries or strawberries.

There’s also some evidence that links cherries to many important health benefits from helping to ease the pain of arthritis and gout, to reducing risk factors for heart disease, diabetes and certain cancers.

Venison – A super lean protein that is high in iron, but low in fat.

It’s terrific to use in other Thanksgiving side dishes like Vegan Rice Stuffing Recipe with Cranberries, Squash & Dates.

Pumpkin – Full of fiber, Vitamin A, anti-oxidants, and low in calories. I use pumpkin puree in everything from my Weight Watchers Pumpkin Mousse to Pumpkin Bread Pudding.

I use canned pumpkin because it’s convenient. But it’s easy to learn how to cook pumpkin, too!

Crockpot Pumpkin Dump Cake is like a layer of creamy pumpkin mousse topped by a layer of spice cake.

Make this Pimento Cheese Spread Recipe in a shape of a pumpkin for a fun party appetizer.

Serve up this Gluten Free Pumpkin Bread Recipe for breakfast or as a snack. So yummy you won’t know it’s gluten free.

Both Instant Pot Sweet Potatoes and Crockpot Mashed Potatoes are easy to make side dishes that don't take up room in your oven while you're making other Thanksgiving dishes and desserts.

Originally published on November 10, 2010 and October 25, 2017. Updated with new pictures and information.