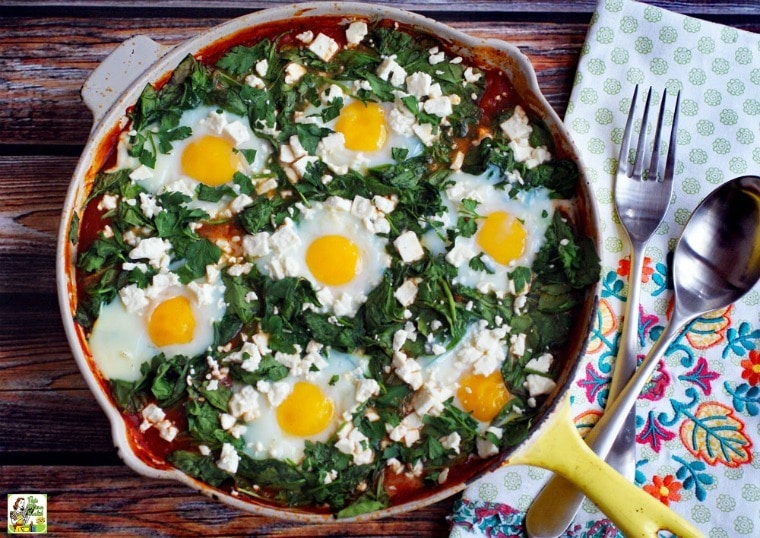 Have you ever tried Shakshuka with Feta?  Shakshuka (or shakshouka) – pronounced “shahk-SHOO-kah” – is a staple of Middle Eastern cuisine.

Traditionally it’s cooked in a cast iron pan with a tomato-based sauce and eggs as the main ingredients.

However, I’ve seen all kinds of shakshuka ingredients like chickpeas, potatoes, Middle Eastern and Mediterranean spices, and various types of meats and cheeses.

I make my shakshuka with feta and some type of meaty bacon, ham or pancetta. I love how the saltiness of the cheese and meat compliments the sauce, eggs and spinach.

Anyway you make it, it’s a show stopper. The gorgeous yellow yokes, beautiful green leaves, and a red sauce served in a cast iron skillet are sure to have everyone oohing and aahing when you pull it out of the oven. 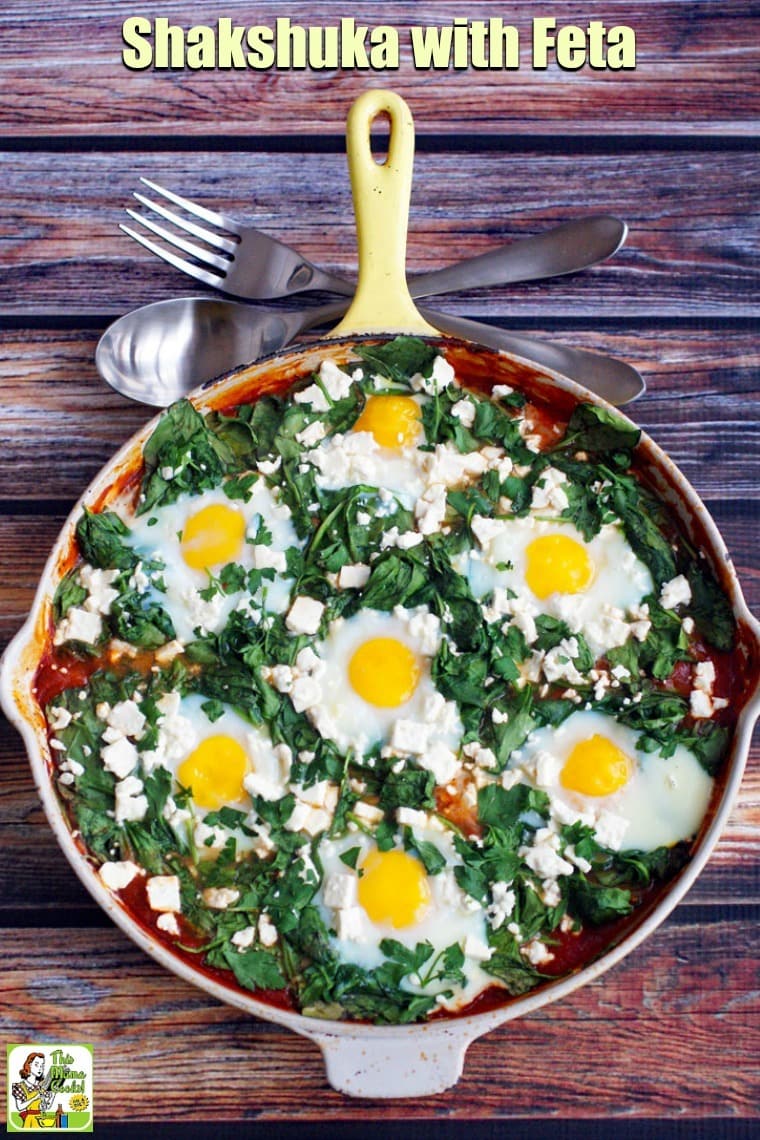 An easy shakshuka recipe for all meals

Since shakshuka features eggs, it’s often served as a breakfast or brunch dish.

It may remind you of a somewhat similar Mexican dish, Breakfast Chilaquiles.

You can serve it with pita, gluten free toast, or some crusty French or Italian style bread to sop up the sauce.

Try serving it lunch or dinner with a hearty side salad, like a Kale Salad with Fruity Vinaigrette.

It’s also a festive dish for the holidays since it’s red and green! 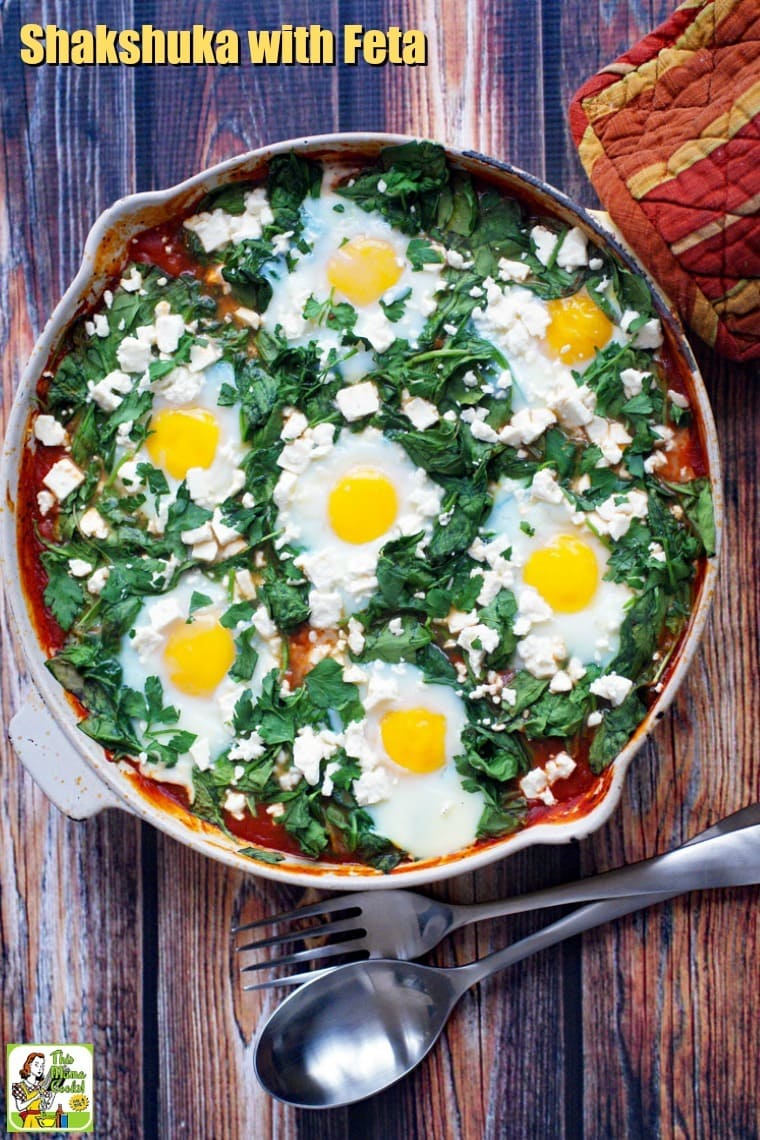 I’ve decided to make my shakshuka recipe as easy as possible when it comes to serving it up. However, some people may not like runny eggs. Not to worry!

If you have a mixed group, serve it to the “runny” people first. Then stick your skillet back in the oven for a few more minutes to firm up the remaining eggs.

Or serve the shakshuka in oven safe bowls and put those in the oven for a couple of minutes to firm up the eggs.

Either way, everyone’s happy with their eggs cooked to order! 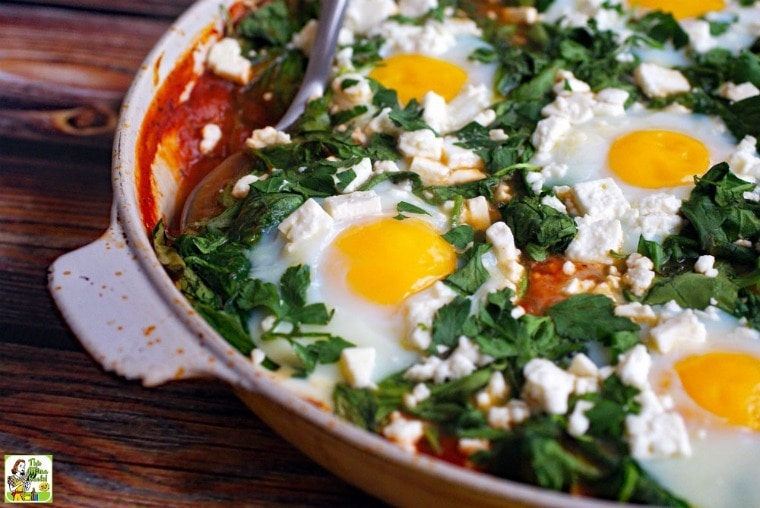 To make this a vegetarian dish, skip the pancetta, meaty bacon or country ham and add a little more feta.

If you grow fresh basil and oregano in your kitchen garden, use that instead of the dried herbs. Use 1/2 tablespoon of finely chopped fresh herbs instead of 1/2 teaspoon of dried herbs.

Like spicy dishes? Add a couple more pinches of crushed red pepper or serve the shakshuka with your favorite hot sauce. 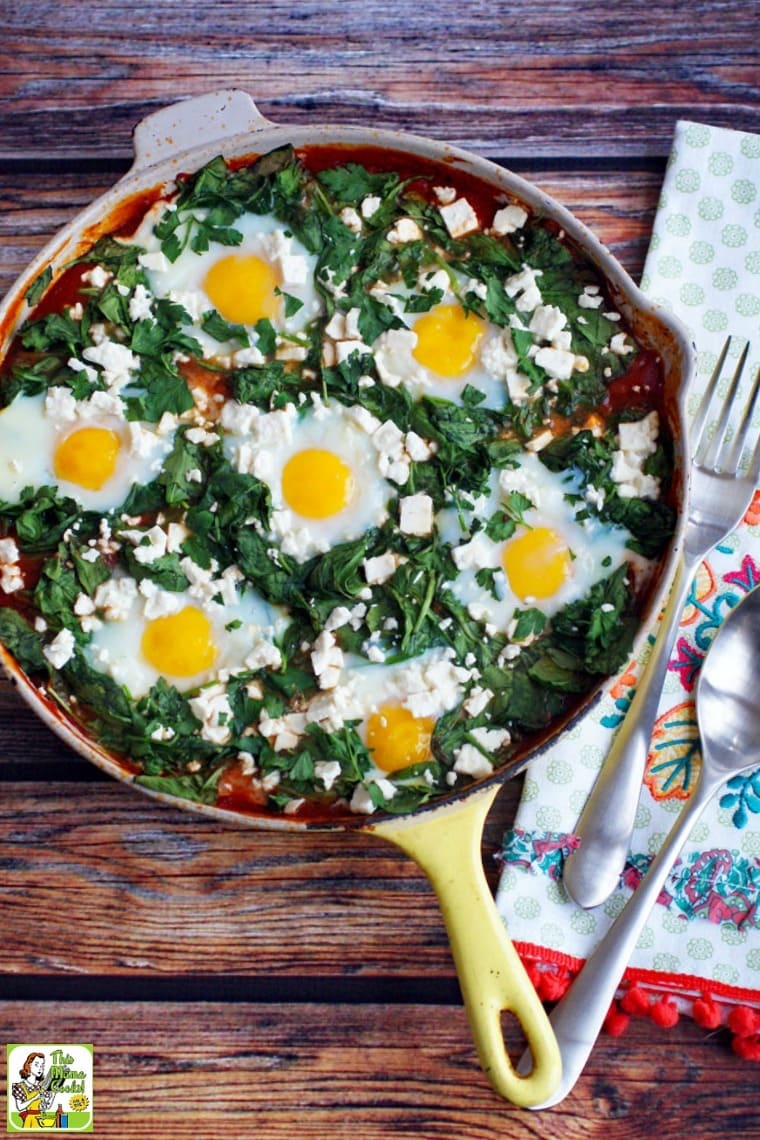 What kind of skillet?

I made this easy shakshuka recipe in my yellow 11 3/4-inch Le Creuset Enameled Cast-Iron Skillet.

I was lucky enough to buy it from a friend for next to nothing because she was moving to the UK.

However, if you’re looking for an affordable cast iron skillet, I recommend Lodge Cast Iron Skillets.

They’re made in the USA, well made, and will work on your Induction Cooktop Stove.

However, you don’t have to make Shakshuka with Feta in a cast iron skillet.

But it should be a large oven safe skillet. You don’t want the handle to melt and ruin your food!

If you love serving up one pot, skillet recipes, you need to check out these out:

This Easy Nachos Recipe is an awesome appetizer but is hearty enough for dinner, too.

For breakfast you can cook up some Baked Eggs with Skillet Potatoes in Pesto.

For a one pot dinner, try Easy Gluten Free Pot Pie in a Skillet or this Sweet Potato Pork Hash Recipe.

For a Mexican style breakfast, try this Easy Breakfast Chilaquiles Recipe made with spicy chorizo.

Originally posted on December 9, 2013. Updated with new photos and information.