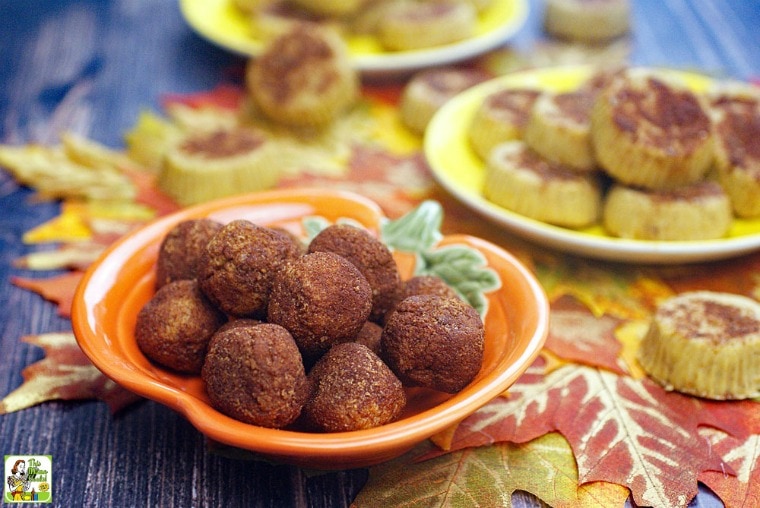 Try this dairy free Pumpkin Fudge if you love fudge if you don't eat dairy because you're vegan.

Or don't eat condensed milk because it upsets your tummy.

Believe it or not, this recipe is made without marshmallow cream, so the pumpkin fudge is lower in sugar and so much better for you.

So what’s the secret? Instead of sweetened condensed milk or fluff, I used coconut butter, sorghum syrup, and monk fruit sweetener.

See below on how to make the best pumpkin fudge recipe you’ll find that will fit into all the food allergies or preferences you have! 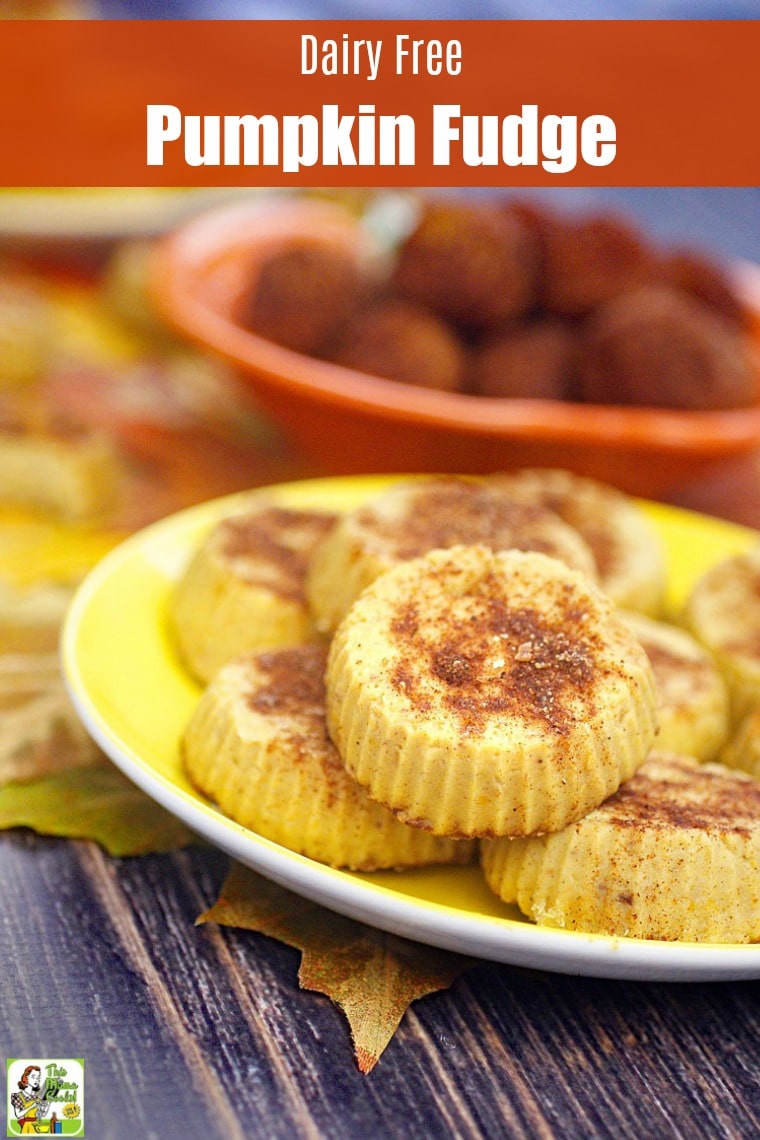 How to make a dairy free fudge that’s sweet

All you need to use is a combination of coconut butter, powdered monk fruit sweetener, and sorghum syrup so you have a vegan fudge.

Coconut Butter: You want to use coconut BUTTER, not coconut oil, coconut cream or coconut milk.

Powdered Monk Fruit Sweetener: Then you want to sweeten the easy pumpkin fudge with powdered monk fruit sweetener, one of my favorite no calorie sweeteners.

I also used powdered monk fruit in the cinnamon sugar that I used to decorate the fudge balls in as well as the recipe for pumpkin fudge mini pies.

Sorghum Syrup: One of the ingredients for pumpkin fudge I recommend is sorghum syrup. Without a sugary syrup of some kind, the fudge would be too dry and fall apart.

Sorghum syrup is used by home brewers and commercial brewers to make gluten free beer. You can find it at beer brewing stores or online.

If you can’t find sorghum, a good substitute is brown rice syrup.

For pumpkin fudge recipes, agave and maple syrup are too runny. And honey isn’t vegan.

And did I mention all this makes a gluten free fudge, too? 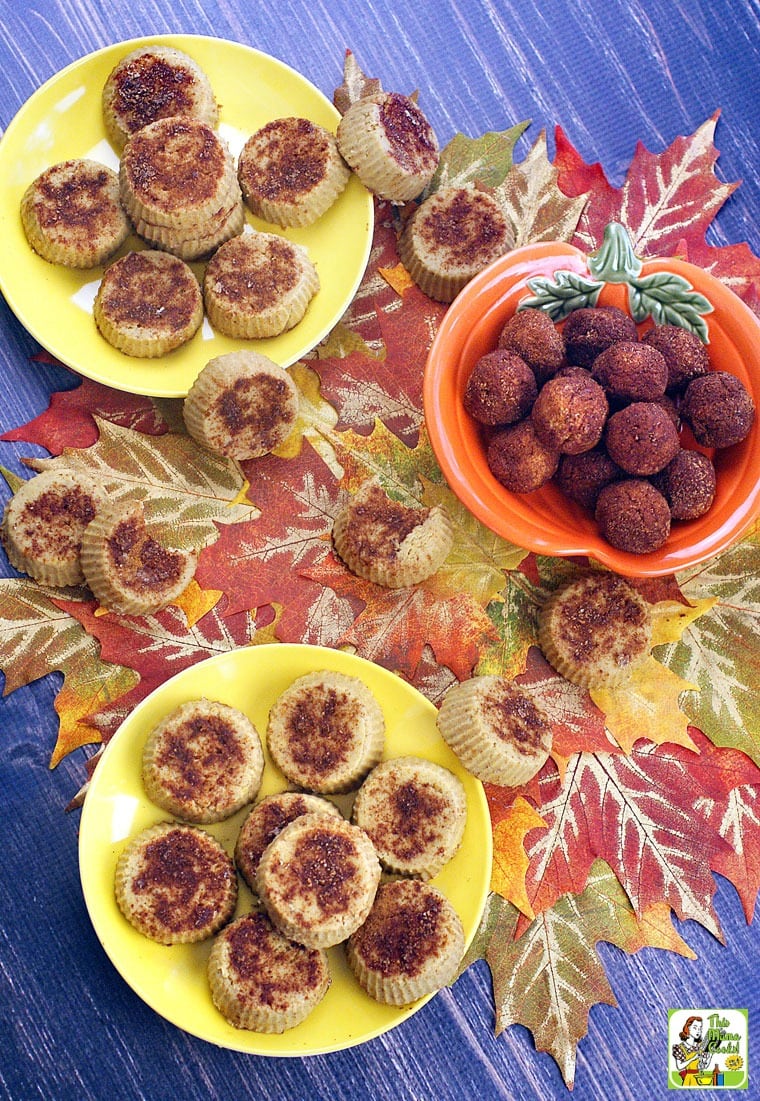 The fun thing about this easy pumpkin fudge recipe is that you can make it two ways – into pumpkin pie fudge balls or mini pies.

Making the fudge balls is the easiest because you don’t need any extra equipment. Just your hands.

It’s also a fun way to get the kids involved in making fudge, since even small kiddos can make a few balls. Or they can help roll them into the cinnamon sugar.

I preferred the taste of the pumpkin pie fudge balls since they had more cinnamon sugar, which complimented the pumpkin spice fudge.

However, I love the look of the pumpkin fudge mini pies, which look a little like Reese’s Peanut Butter Cups.

To make them, you’ll need a set of silicon baking cups, which are fun for baking everything from cupcakes to Hash Brown Sausage Muffins to Homemade Peanut Butter Cups.

Silicon baking cups are fun to use and the fudge pops right out.

Super easy to clean, too. Just soak in soapy hot water and rinse. 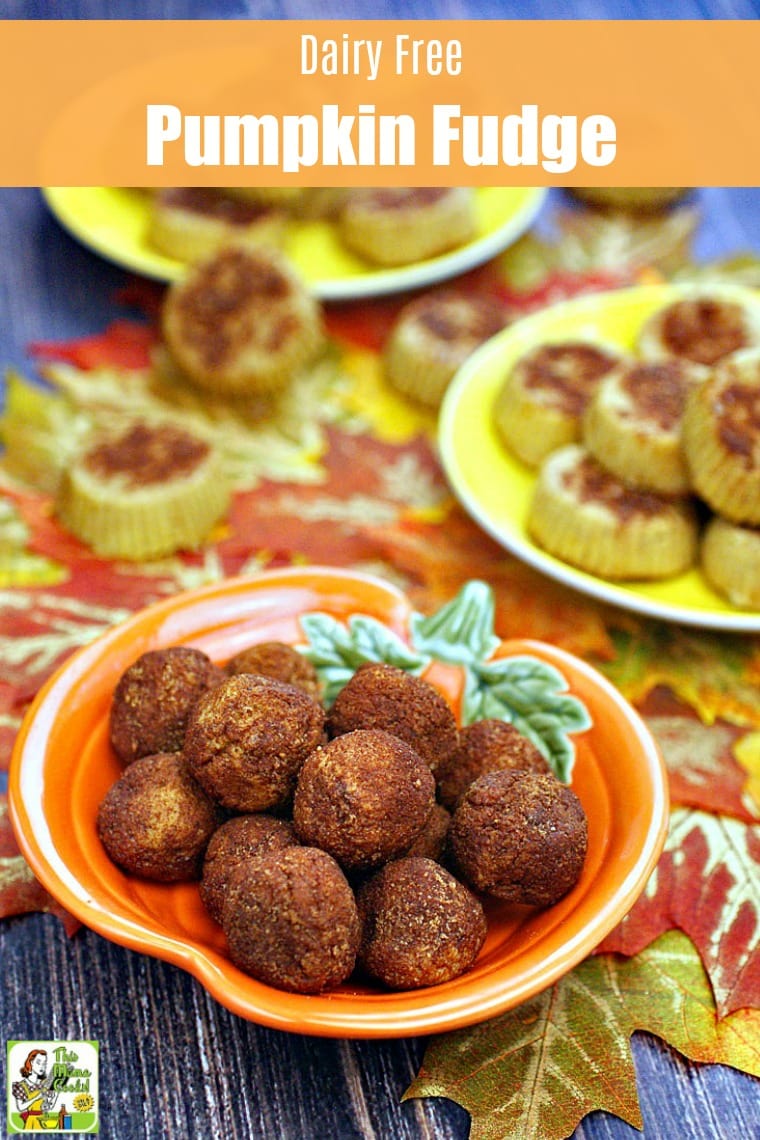 More tips on how to make dairy free pumpkin fudge

If you want to make your own pumpkin puree, learn How to Cook a Fresh Pumpkin.

Spices: If you wish, you can add more spices and powdered monk fruit to this dairy free pumpkin fudge recipe to suit your personal tastes.

Storage: Store the fudge in an airtight covered container in the refrigerator. It should last a couple of weeks if your family doesn’t eat it all up before that!

See more tips on how long does fudge last? Does fudge go bad?

Freezing pumpkin fudge: To prevent breakage and the fudge from drying out, wrap the pumpkin fudge tightly in plastic wrap. Then place wrapped fudge in an airtight container or freezer bag.

Don't forget to label the container with the date and the contents!

For the cinnamon sugar:

For the cinnamon sugar:

Updated with new pictures and information.