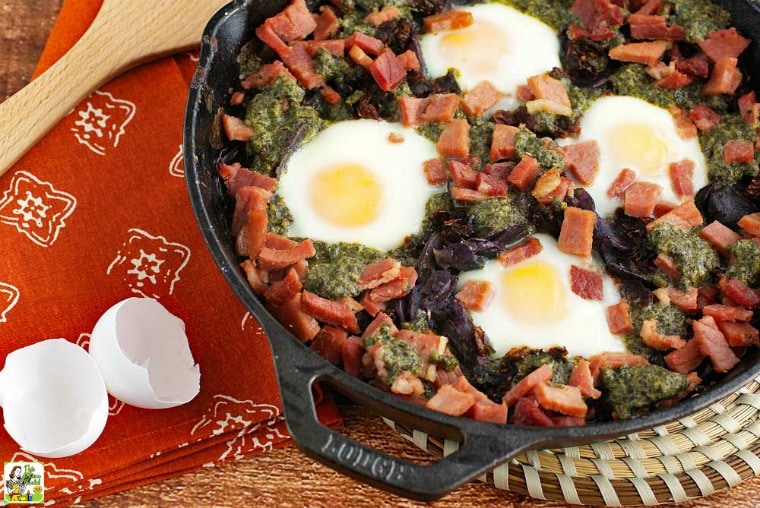 You’ll love flavors of this Baked Eggs with Skillet Potatoes in Pesto recipe.

Best of all, it’s easy to make on a weekend morning when you’re half asleep and want something special.

Why make Baked Eggs with Skillet Potatoes in Pesto

As part of a blogger recipe challenge, I picked Skillet Baked Pesto & Tomato Taters, a baked eggs entrée, from Andrea at Adventures in All Things Food.

Her skillet potatoes recipe combines foods that I love to use when making pasta and grilling chicken, such as pesto and sun dried tomatoes.

So I knew this baked eggs and skillet potatoes was going to be awesome!

Cooking with a cast iron skillet:

I love that this recipe gives me an excuse to use my favorite 10” Lodge cast iron skillet!

I enjoy cooking with cast iron knowing that it’s an easy way to get a little iron into our diets.

This is especially important for anyone, like my daughter, Lucie, who is slightly anemic. 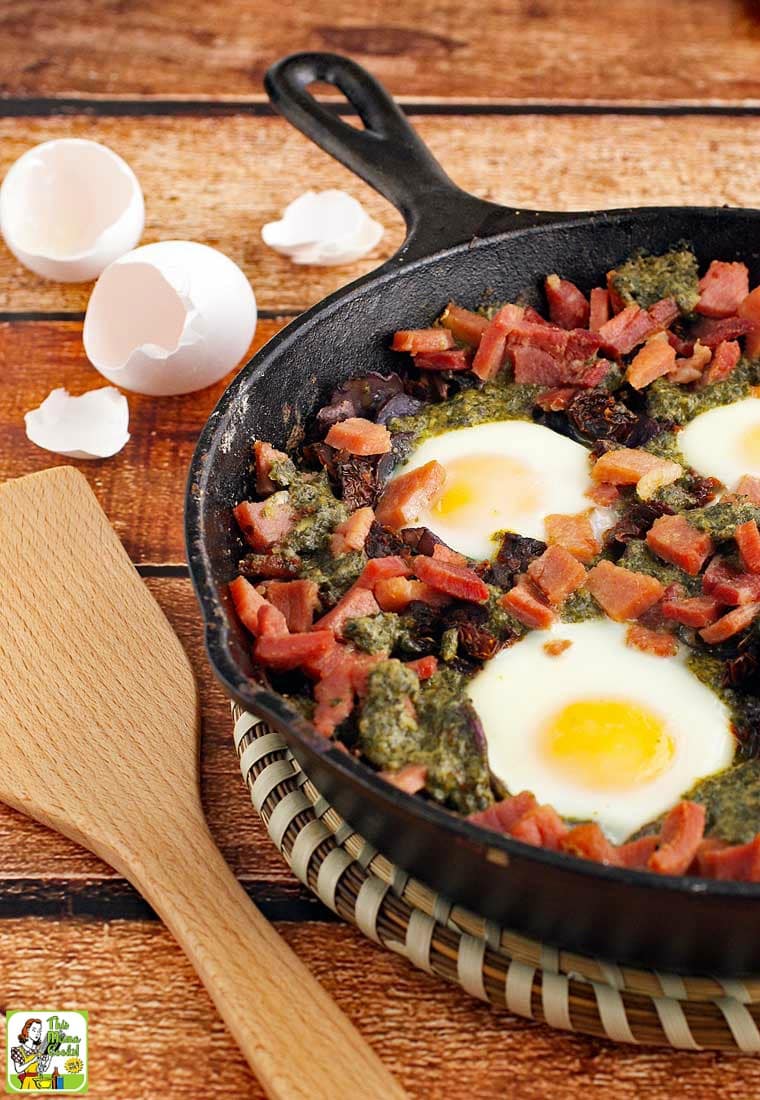 What type of potatoes: For fun, I used baby purple potatoes instead for my baked eggs and skillet potatoes recipe. Don’t you love the color?

If you can’t find purple, go ahead and red, purple, gold or whatever variety of baby potatoes that suits your fancy since you don’t have to peel them. (Just remember to wash them!)

How to slice potatoes: Make sure your potatoes are thinly sliced so they cook quickly and evenly.

I used a food processor to slice the potatoes as this was the easiest way to get super thin slices. It’s worth getting your it out of the cupboard!

What type of ham: I fried the potatoes up in the grease from cooking up the country ham, which is a staple in parts of the southern US.

However, if you can’t find country ham because you don’t live in the South or prefer bacon, make sure to use enough to cover your skillet. (Andrea used 4 pieces in her recipe.)

You can also use Canadian bacon or thick ham (perfect if you have leftover Crockpot Spiral Ham) and a little oil, butter or leftover bacon grease. 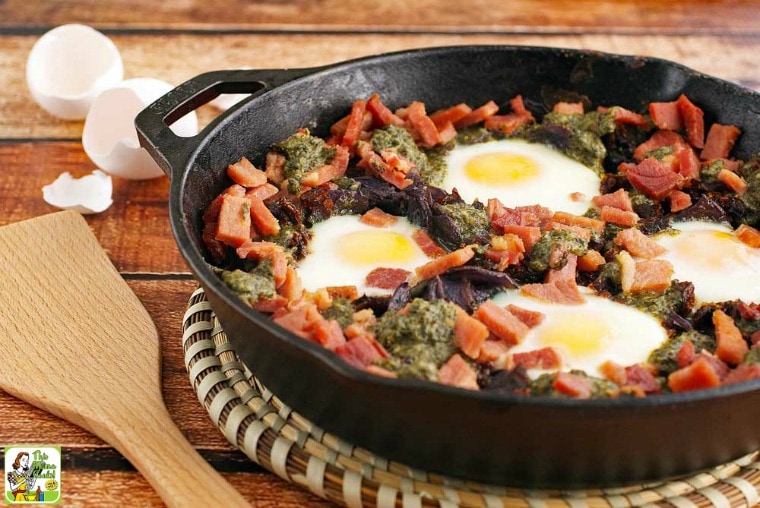 When I served this baked eggs dish for a late breakfast in my 10” skillet, I found that one egg was plenty of food for me.

However, my husband wanted more. (He and my daughter, Lucie, shared another portion between the two of them.)

How to serve: Next time, I’ll serve this with some crusty bread or gluten free toast, so everyone feels satisfied.

Pesto: Have you ever made homemade pesto? Sometimes I make my own when we have bunches of basil growing in the garden.

I prefer making pesto from scratch since many store brands contain nuts and my daughter has a nut allergy. Instead, I use pine nuts, which are actually seeds and not nuts.

You can also use jarred pesto from the store, of course. 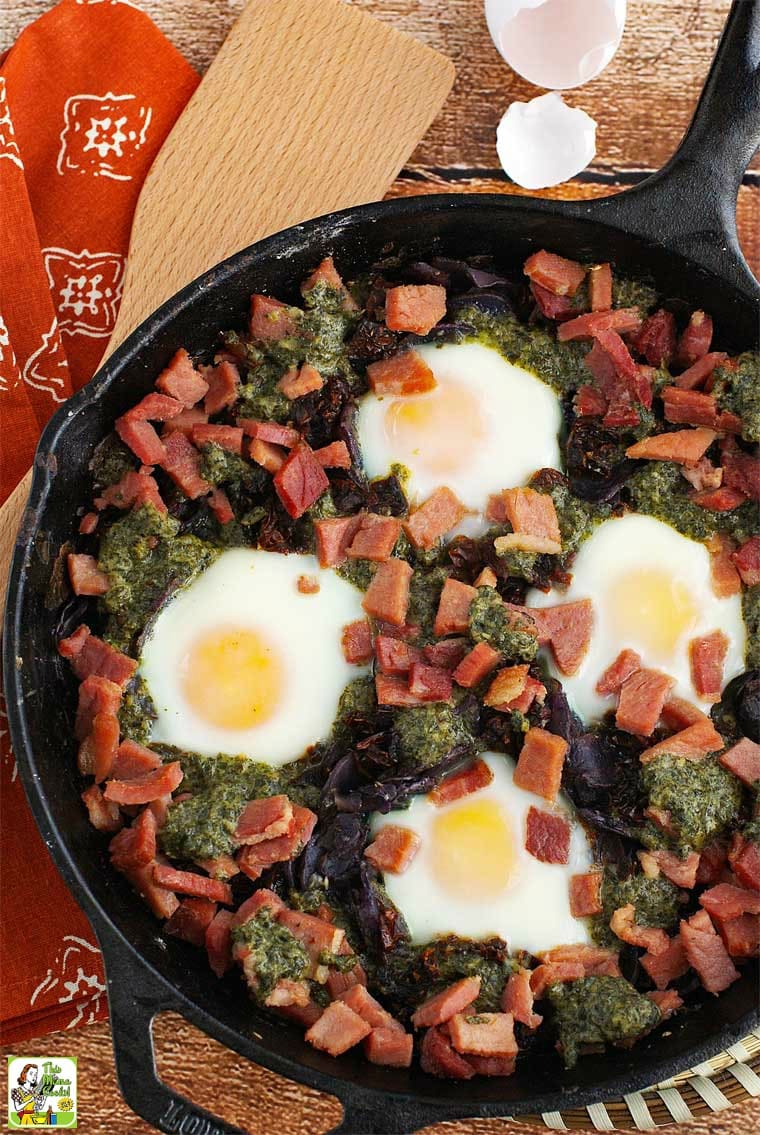 Make this for dinner! Baked Eggs with Skillet Potatoes in Pesto would also make a terrific brinner (breakfast for dinner) dish.

Serve it with a side salad and toast.

Try these one pot skillet dishes

If you want to use your cast iron skillet more often, try these recipes:

This Easy Nachos Recipe is also made in a skillet. Serve it as a party appetizer or for a fun, family style dinner.

Best thing about using your skillet is that one pot cooking makes for easier clean up!

13 thoughts on “Baked Eggs with Skillet Potatoes in Pesto Recipe”