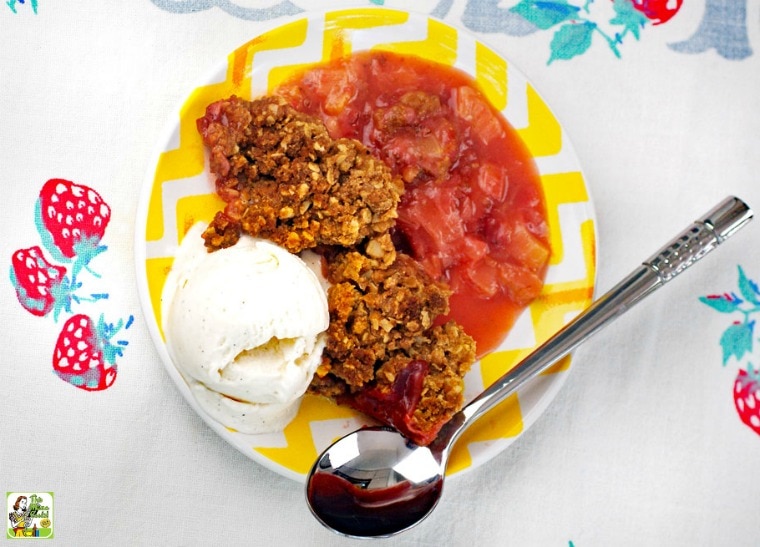 If you love baking rhubarb recipes for dessert, you must try this Rhubarb Crisp with Strawberries.

My rhubarb crisp recipe is based on a strawberry rhubarb crisp from Little Bit of Everything. I created this gluten free rhubarb crisp as part of a recipe challenge where we recreate other blogger’s recipes. (With permission, of course!)

I love a good rhubarb crisp and remember having an amazing one at my sister’s friends house. At the time, I was pregnant with my daughter, Lucie. I felt lousy and almost all foods grossed me out.

The rhubarb crisp served at my sister’s baby shower was so good that another pregnant woman and I ate several bowls. It was life saving!

Ever since then, I've wanted to make a rhubarb crisp recipe. So when I saw the one from a Little Bit of Everything that Julie adapted from Food & Wine, I had to try it! 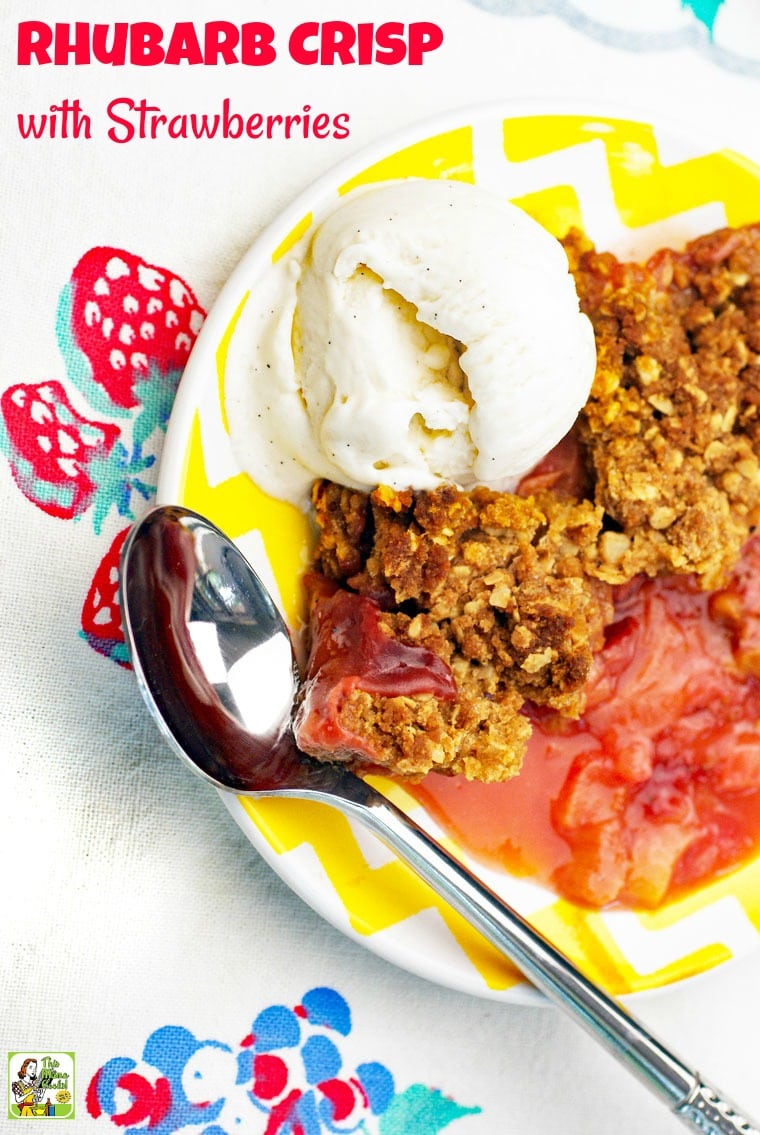 Making the Rhubarb Crisp with Strawberries gluten free was easy to do.

First, I used an all purpose gluten free flour like Bob’s Red Mill Gluten-Free 1-to-1 Baking Flour. I love this product because it cooks up just like regular flour.

I also used gluten free quick cooking oats. While oats are naturally gluten free, not all oats are certified to be gluten free due to cross-contamination issues either in the growing fields, during shipping or while being processed. So check product labels! 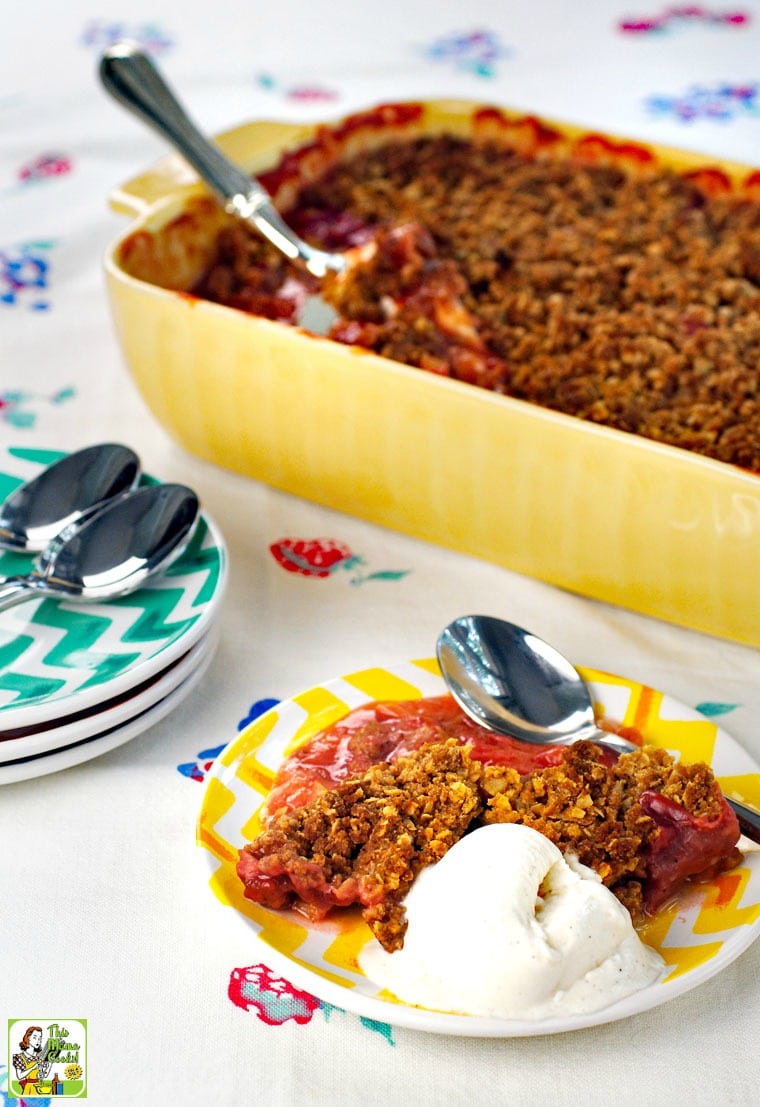 Rhubarb can be bitter, which is why it’s paired with sweet fruits like strawberries. And that’s why rhubarb recipes feature oodles of sugar.

Wanting to cut back on the sugar, I added some pineapple. I just did it for fun since I had leftover pineapple from making pancakes that morning.

My kids supposedly hate pineapple, so after they raved how good the rhubarb crisp was, I’m told them it had pineapple in it. They were shocked!

I also used natural, no calorie Swerve Sweetener and molasses in the crisp instead of brown sugar.

However, you could use powered monk fruit sweetener instead of the Swerve. Or try Splenda Brown Sugar Blend instead of both. All are terrific products. 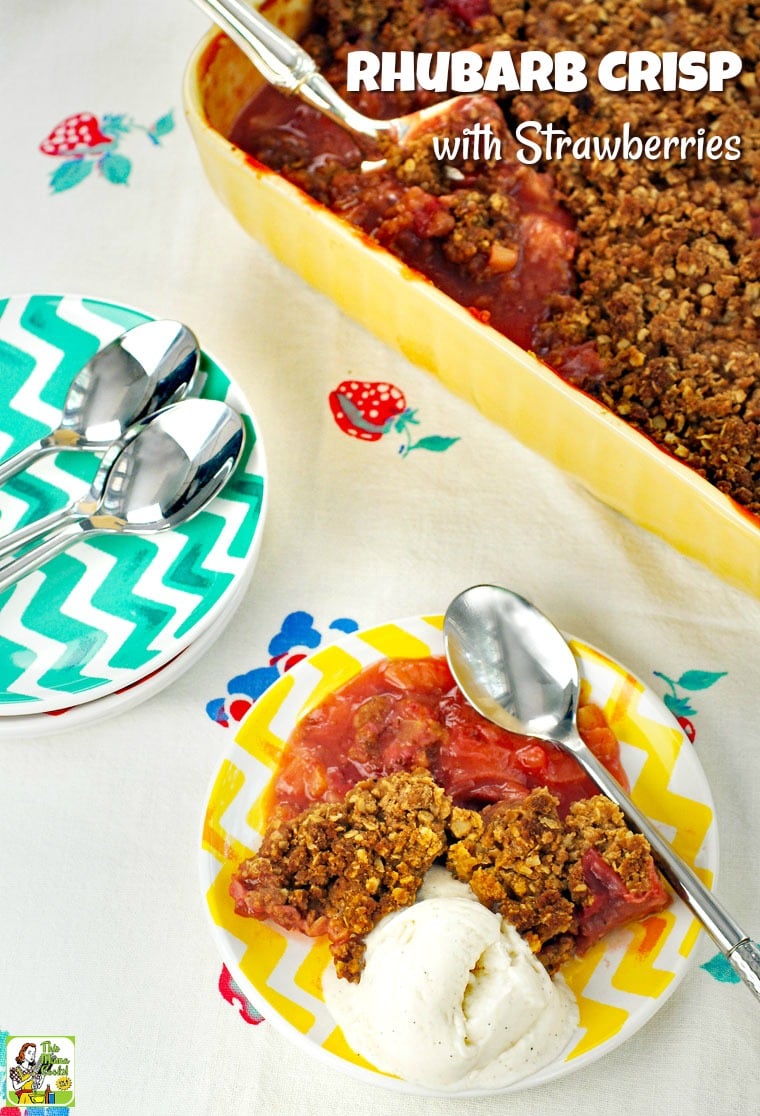 To make the Strawberry Rhubarb Crisp dairy free, I used a dairy free or vegan buttery spread like Earth Balance.

Finally, you must serve the crisp warm with a scoop of vanilla ice cream. It elevates the dessert to the sublime. Serve it with a scoop of your favorite soy or coconut vanilla frozen “ice cream.”

Originally published on May 12, 2014. Updated with new pictures and information.

18 thoughts on “Rhubarb Crisp with Strawberries”

Leave a Reply to Dee @ Cocktails with Mom Cancel reply