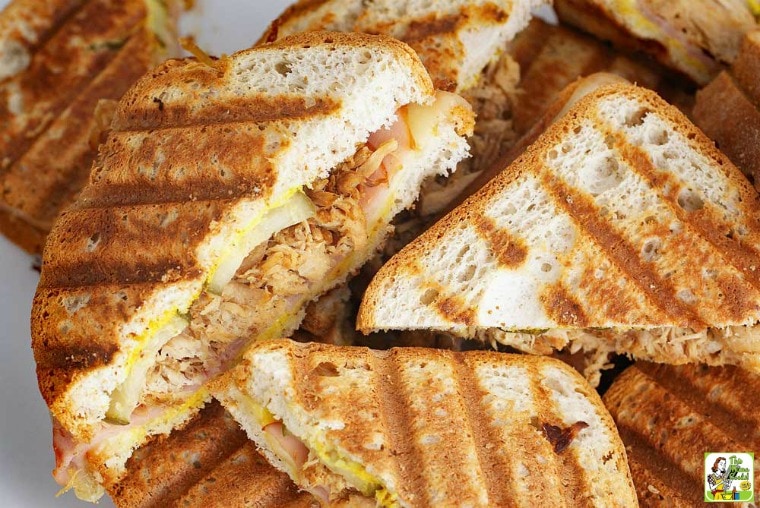 You have to try making an Easy Cuban Panini. They’re made with tender slow cooker pulled pork.

These are exactly like the authentic Cuban sandwich recipe, but are perfect for anyone on a gluten free diet.

The secret is using gluten free bread and grilling it like a panini sandwich.

It’s just as delicious as an traditional Cuban sandwich and is GF-friendly.

Even if you’re not gluten free, you’ll find this Cuban pulled pork sandwich recipe super delicious and easy to make. 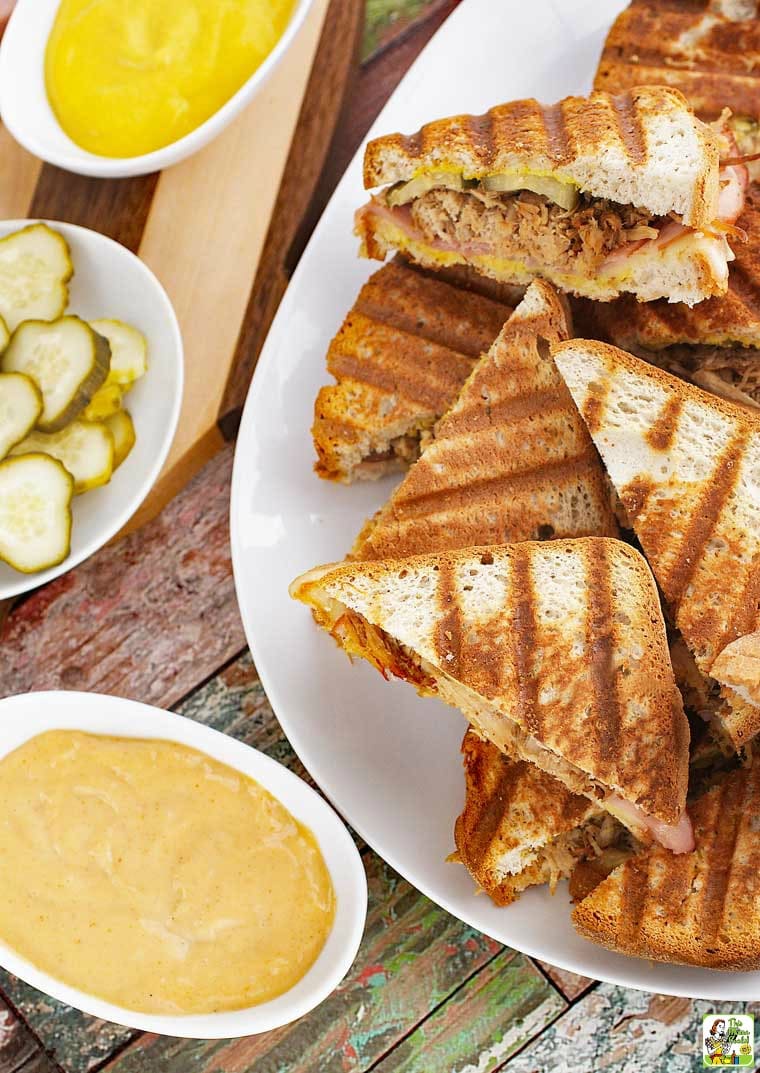 I fell in love with Columbia Restaurant's authentic Cuban sandwich during a trip to  Tampa.

Inspired, I wanted to recreate the taste of an traditional Cuban sandwich that was gluten free.

First, it had to be easy to cook up, so I thought Cuban Panini made with slow cooker pulled pork would be a breeze to make for dinner or a party.

Plus, it’s easily kept warm for a party if you’re entertaining.

Use a salad dressing marinade

One of my favorite ways to season shredded pork is by using marinades and salad dressings.

In this recipe, I used my favorite bottled Thousand Island dressing to give it a unique flavor. You can also use additional Thousand Island as a dip for the panini after it’s toasted.

You can use either a regular or lite dressing. Both would be delicious! Just make sure the Thousand Island dressing you choose is gluten free. 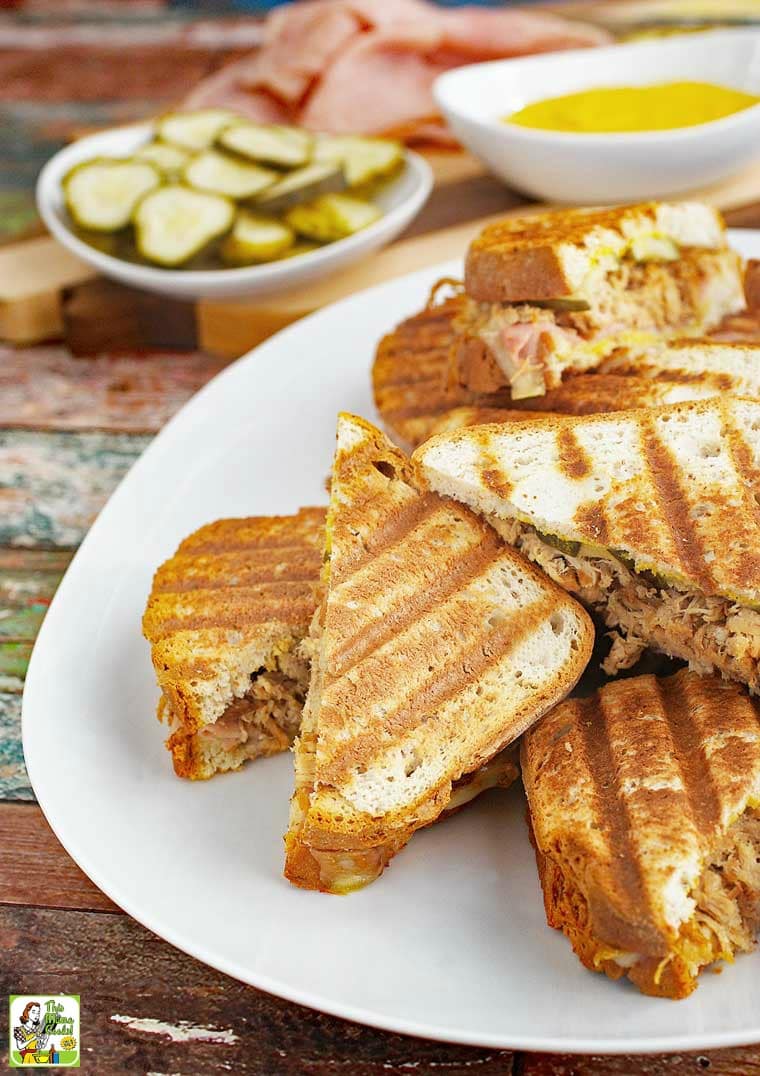 Can I make this in advance?

The nice thing about making pulled pork this way for your Cuban panini recipe, is that you can set it up the night before in your crock-pot.

Store it overnight in the refrigerator and get it going that morning while you eat breakfast.

Cook on high: If you’re in a rush, get the pork cooking on high so the pulled pork is ready to add to turn into Cuban pulled pork sandwiches for an early afternoon party.

To get it cooking even quicker, cut up the pork loin into smaller pieces.

If you’re trying to cut back a bit on the calories or sweetener, use 1/2 cup powdered monk fruit sweetener instead of the honey or agave nectar. Every little bit helps!

Love Cuban pulled pork sandwiches? Then you have to try these Cuban Sliders! 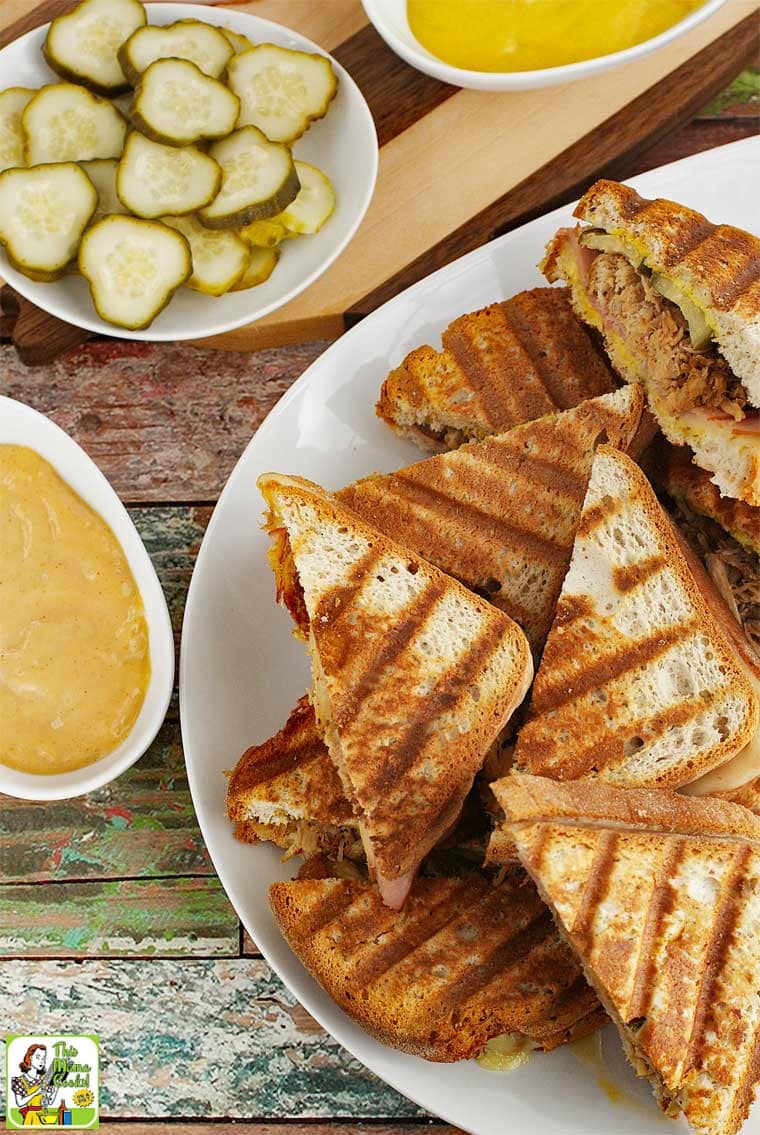 Putting together the Cuban panini

Now that I use them, I no longer have to soak my crock-pot overnight and scrub it using a scouring pad.

An authentic Cuban sandwich is served on Cuban bread, which is very similar to a French baguette or Italian style bread.

What kind of bread?

While my family tried a gluten free Cuban pulled pork sandwich, they didn’t mind the GF bread, because the insides were so tasty! 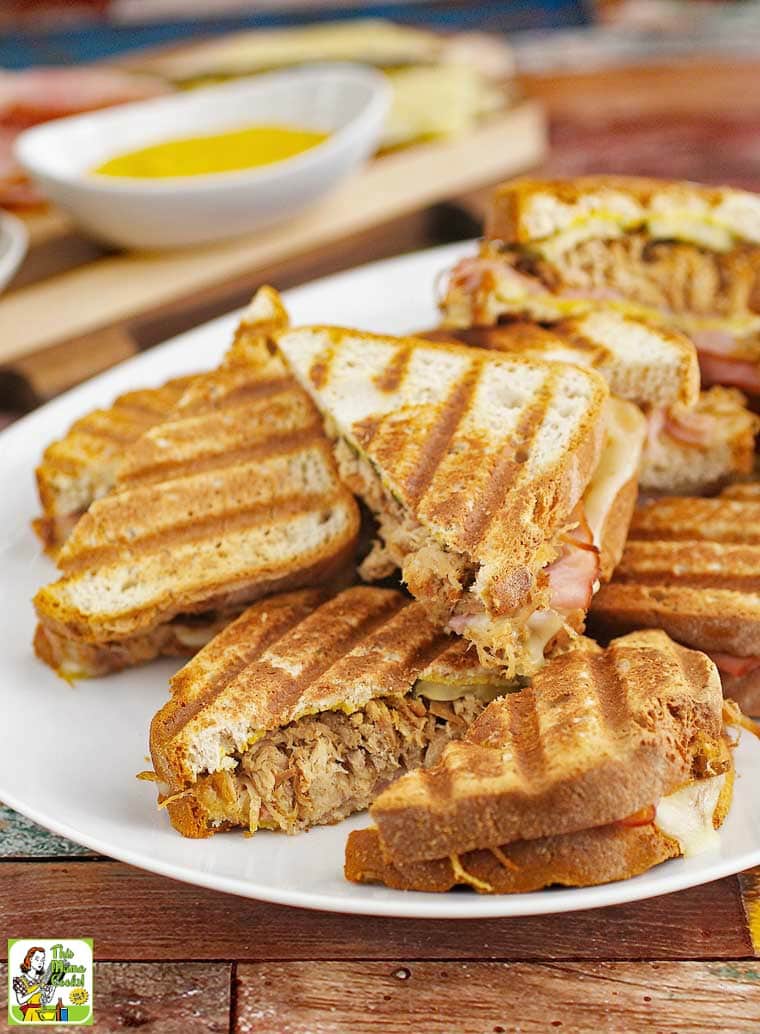 Preparing the recipe for Cuban Panini

An Easy Cuban Panini, like an traditional Cuban sandwich recipe, should be served with the following fillings and condiments:

● thinly sliced Swiss or baby Swiss cheese, folded or cut into the size of the Cuban panini

● thinly sliced deli ham, also folded or cut into the size of the panini

I like using kitchen shears to cut up several slices of ham and Swiss cheese at a time.

You can also use them to trim up the sides of the panini if you find there’s too much cheese or ham hanging over the edge of the bread.

Don’t have a panini grill? Don’t worry! Countertop grills are just as good and much more budget-friendly.

When we were undergoing a kitchen remodel, our “George” was a lifesaver. They’re also super affordable.

Or make sure to wipe down the grill carefully before putting on a gluten free panini. Don’t want to give our GF guests a tummy ache!

Prepare the grill: Don’t forget to spray a little cooking spray on your countertop grill to prevent the panini from sticking!

Or you could also brush some of the Thousand Island dressing on the outside of the bread before grilling.

The oil in the dressing will prevent the sandwich from sticking, too.

Salads to serve with your Cuban Panini

There’s nothing better than a salad side dish to round out your meal.

A fruit salad like Watermelon Salad with Mint & Feta Recipe would also be a tasty choice.

You could also try Broccoli Bacon Salad Recipe or Cucumber Onion Salad as easy to make side salads to make for dinner.

For making the Easy Cuban Panini:

To make the Easy Cuban Panini: