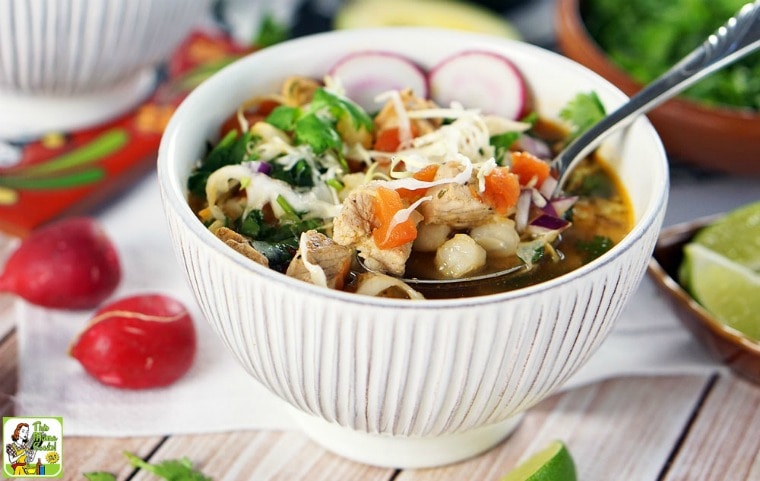 This 30-Minute Pozole Recipe was inspired by a trip to Santa Fe, New Mexico. I dined at the Famous Plaza Café, Santa Fe’s oldest restaurant and ordered Pozole Pork for breakfast.

Their pozole was served with sliced cabbage, diced onion, chopped cilantro, and a slice of lime. Like everything in Santa Fe, it came with red or green chile, too. (I ordered green as red is too spicy for me.)

The pozole verde was amazing! It had a wonderful clear broth, big pieces of shredded pork, and white hominy. It was so delicious that was inspired to come up with an authentic pozole recipe once I got home. 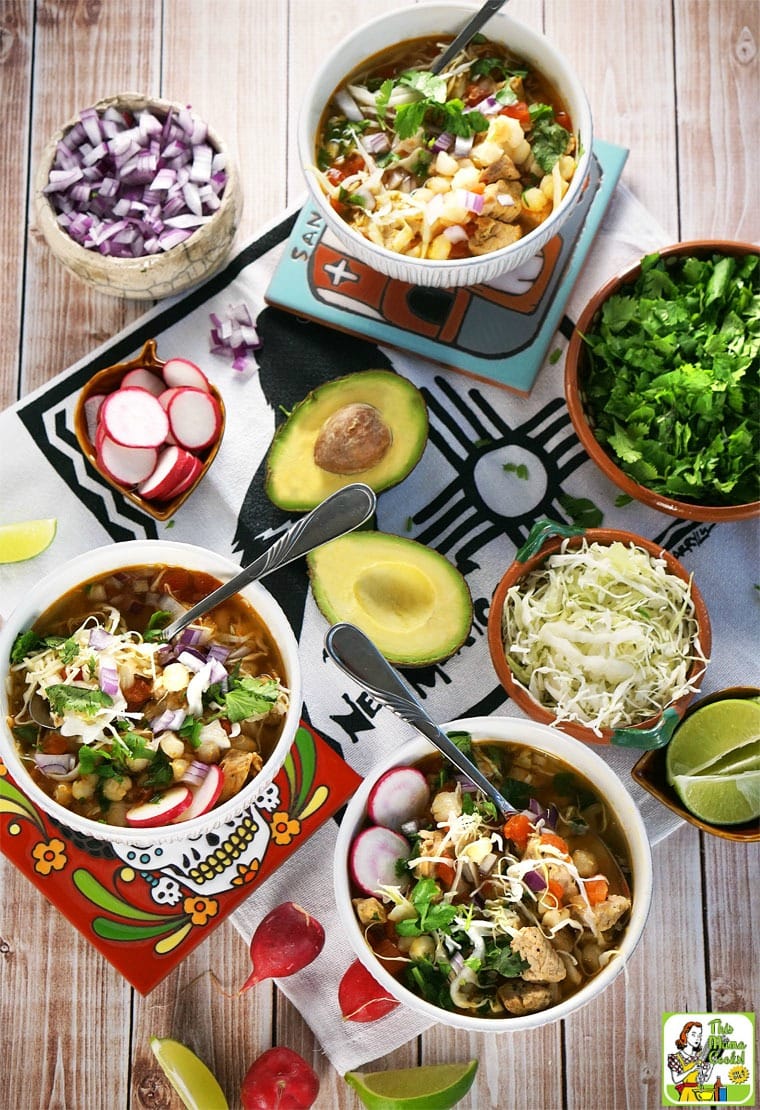 Rojo pozole uses red chiles like ancho or chipotle. The kind I ate in Santa Fe was blanco pozole soup, which I had the option of turning into verde or rojo by adding the green or red chile.

My pozole recipe is a combination of verde and rojo recipe since I used a can of tomatoes with jalapenos and ground chipotle. If you want your posole soup to look green, forgo the can of diced tomatoes and use some canned jalapenos or green chiles. 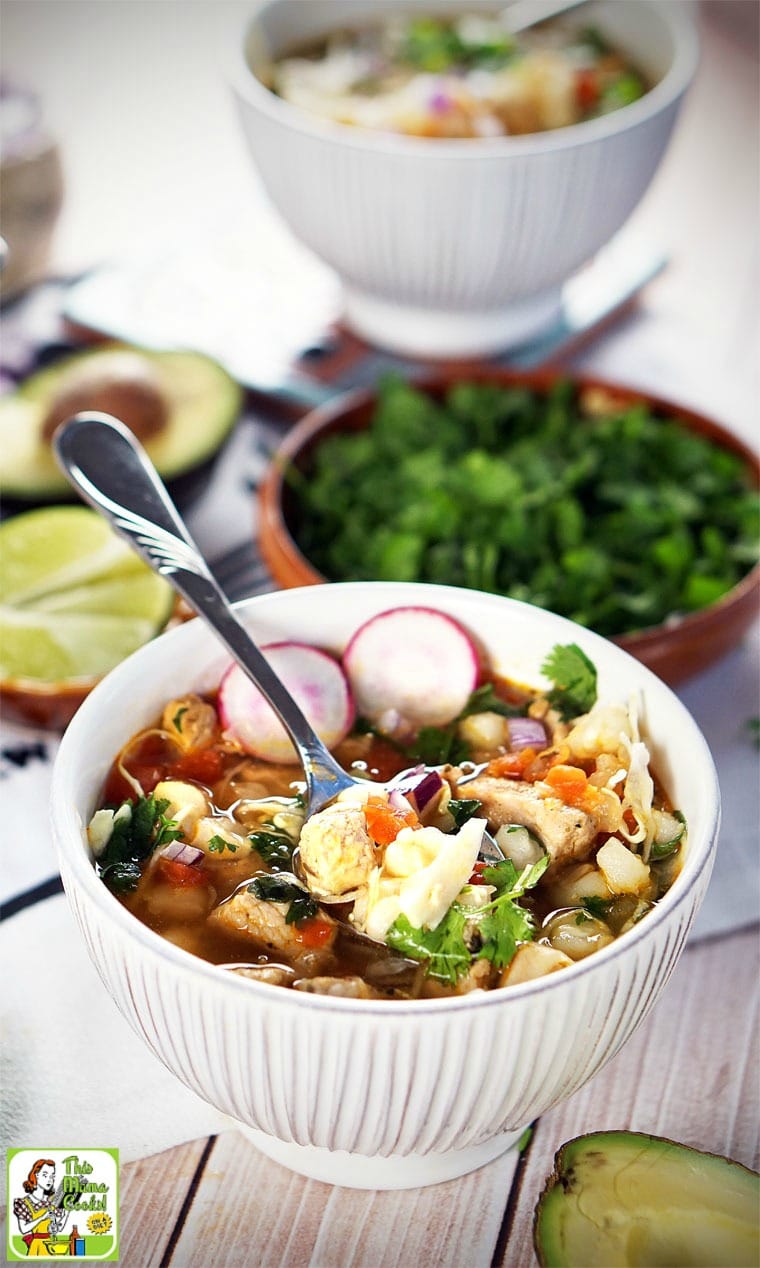 How to make pozole under 30 minutes

When I was researching how to make pozole from the numerous New Mexican cookbooks I bought on my trip, I learned that you could make hominy from scratch.

Hominy is corn that has been dried, then treated by soaking and cooking the corn n a solution of lye and slaked lime (calcium hydroxide).Luckily, you can get canned hominy at your grocery store and don’t have to bother making it from scratch.

Canned hominy comes in white or yellow. My pozole recipe is made with white hominy, since the kind I had in Santa Fe also used white. But you can use yellow hominy if you think that’s prettier.

The cookbooks also pointed out that to get the best flavor, you had to cook the pozole ingredients for hours to mix the flavors of the spices, peppers, broth, pork, and hominy. I’m sure there had to be an easier way, which is why I bought already seasoned pork tenderloin to keep prep and cook time under 30 minutes.

Speaking of canned ingredients, to make this pozole recipe in 30 minutes or less, use canned or prepared foods whenever possible such as prepared onions and cabbage. No need to cry when slicing onions if you can find diced onion in your grocery store. (Look in the salad section.)

I also used bagged thinly sliced cabbage (usually used in coleslaw) so I didn’t have to get my food processor out.

If you find the prepared onion too pricey at your grocery store, use a handheld food chopper to finely dice your onions. Much easier than cutting up the onion with a knife! 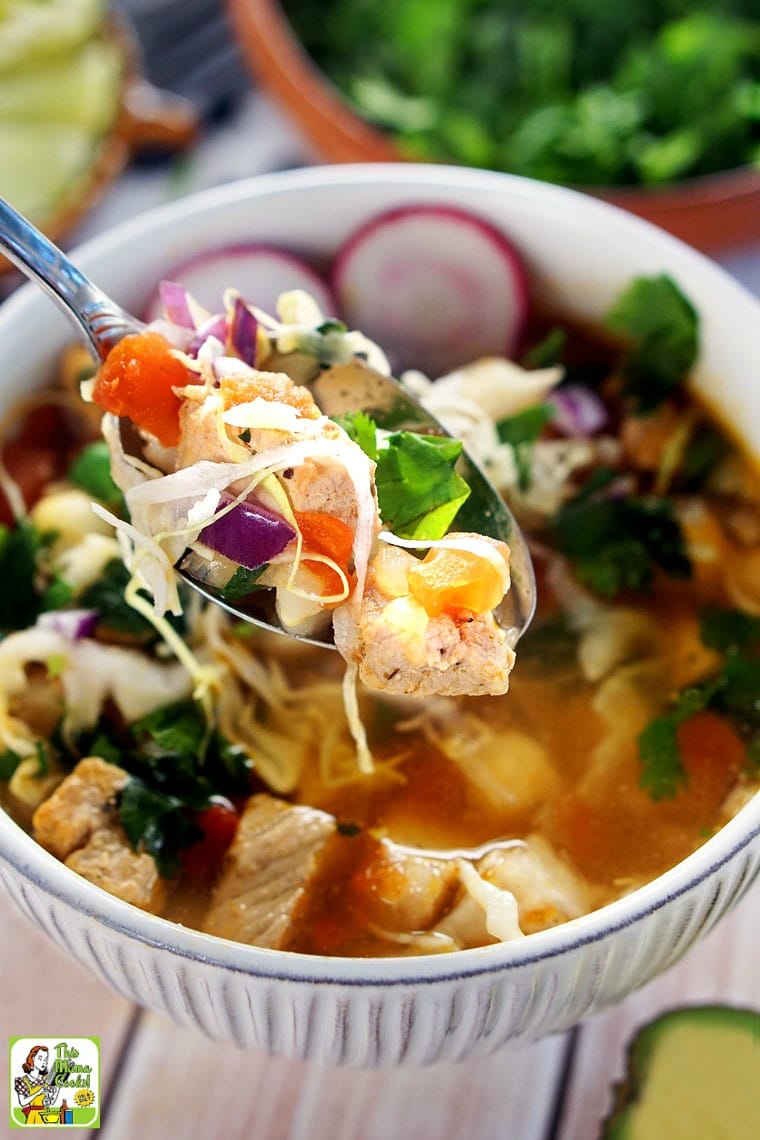 This Mama’s tips for making pazole

If you’re gluten free, make sure that the chicken broth and the seasoned pork loin you’re purchasing are gluten free. Check the label carefully!

You can also use chicken in this pozole recipe. Sauté  two pounds of diced chicken breast in some homemade taco seasoning and a little olive oil. Works great and doesn’t add much time to the cooking process.

Check out the Mexican/Hispanic section of your grocery store for ground chipotle and other spices. They’re often cheaper than the spices you find in the baking aisle.

Speaking of spicy, serve this quick pozole recipe with your favorite Mexican hot sauce to make it even hotter!

Finally, this pozole is hearty enough to be a meal on its own. If you need an extra little something, serve the pozole with tortilla chips and guacamole.

Do you love spicy soup? Check out this Spicy Kale Soup Recipe!

Originally posted on Jul 20, 2016. Updated with new information and pictures.