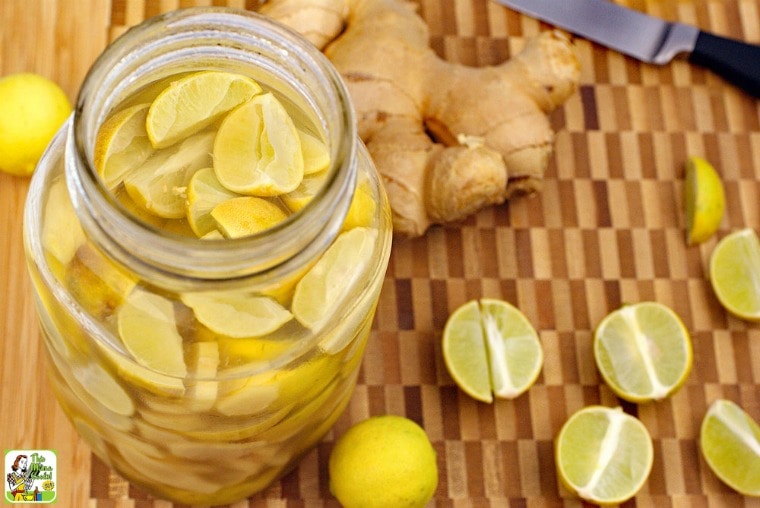 Making Lime & Ginger Infused Vodka is easy to do if you’ve ever wanted to make homemade infused vodka for cocktails.

It’s also a terrific way to make fun gifts for friends and relatives a few months before the holidays roll around.

Infused vodka recipes easy to prepare and enjoyable to make.

You will have to spend a little money on good ingredients, like quality vodka.

But don’t worry since you won’t be making barrels of this lime & ginger infused vodka recipe, just a large Mason jar. 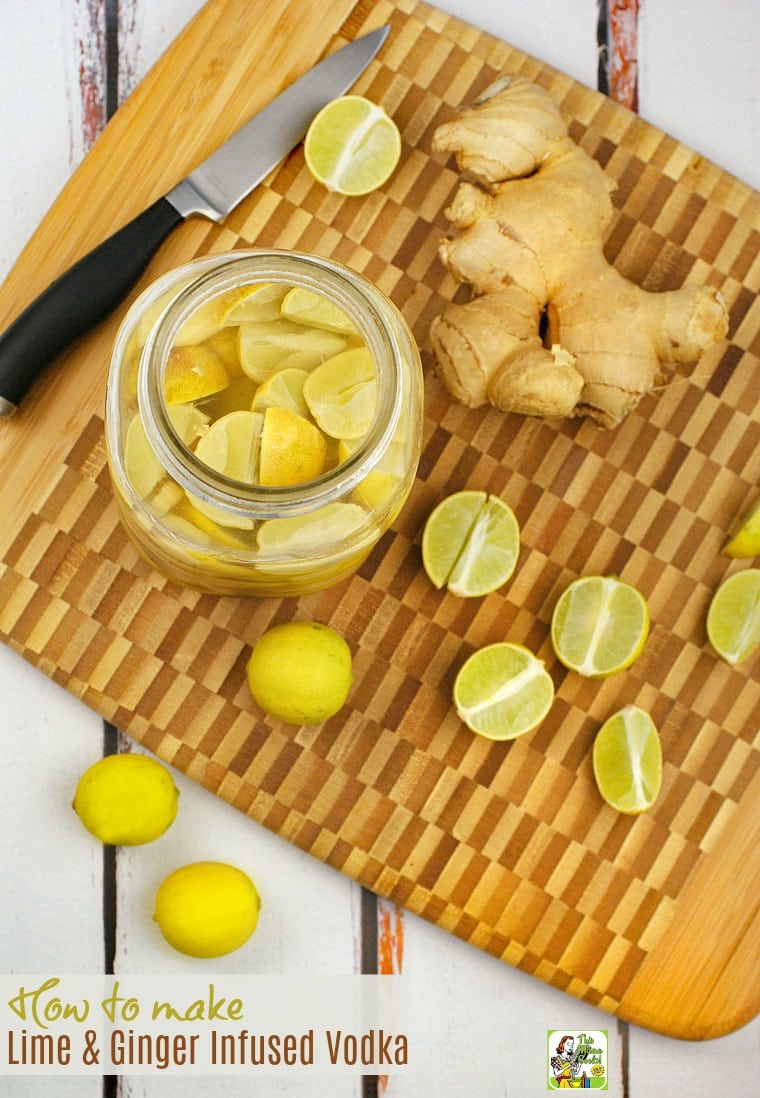 There are two ways of preparing your infused vodka recipes.

I’ve shown the “decant and repeat” process below, where you soak the key limes for at least two weeks. (More weeks is even better!)

Then you sample the vodka to make sure the taste is sufficiently limey. Once the limes peter out, toss them.

Or you can prepare smaller mason jars with the ginger, lime and vodka and give that as a gift.

People can refresh the vodka on their own.

You can also do the second method last minute since you don’t have to wait at least two weeks to decant.

What kind of vodka?

Since this is a base for cocktails, use a good vodka. One you like drinking and making cocktails from normally should suffice.

(Not the cheapest, and not the most expensive. Something middle of the road pricewise.)

What kind of limes?

If you can’t find key limes, you can also use regular limes. Just cut them up into smaller pieces so they fit inside the jars.

How long does infused vodka keep?

I’m not decanting it all that often, so the flavor’s super strong.

I’m not worried about the key limes going bad since they’re 1) refrigerated and 2) preserved in alcohol.

However, over time the limes have gone from a light yellow green to dull yellow. They’re not as pretty but they’re still strong tasting.

What else can I infuse?

You can try other citrus fruits like oranges with the ginger and vodka.

Or experiment with herbs and vodka if you like medicinal type drinks.

Check out my black vodka drink, which infuses black rice in vodka to use in a Dead Man’s Kiss Cocktail for Halloween. 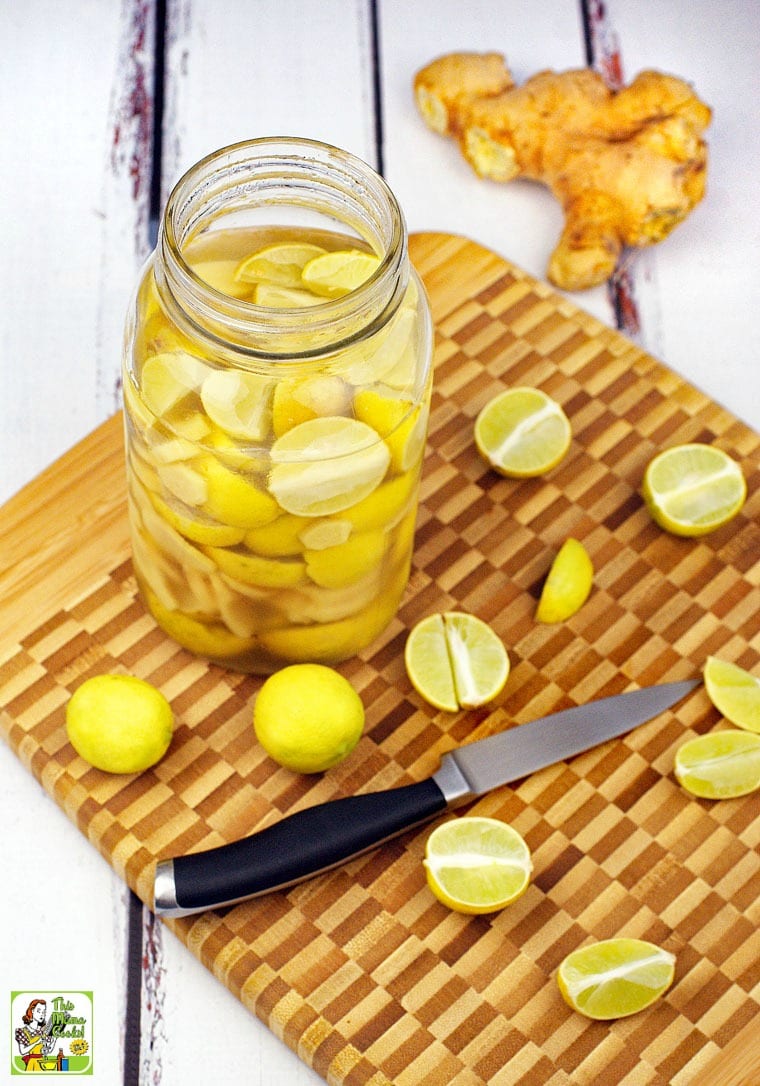 Pouring spout: However, it’s hard to pour the Lime & Ginger Infused Vodka from a Ball Jar without spilling it everywhere. What a waste!

So, include a pouring spout with your homemade infused vodka gift.

I personally like the reCAP Mason Jars POUR, Wide Mouth, Canning Jar Lids since they’re good for both liquids and things like rice or candy.

I also like the Magnuson Mason Jar Pouring Spout. I use these with my jars filled with infused oils.

Bottles: Or you can decant your infused vodka recipes into glass beverage or sauce bottles with corks or stoppers.

These cute bottles also make nice gifts and you don’t have to worry about pouring spouts.

Gifting ideas: To make a terrific homemade gift for your favorite cocktail aficionado, add the bottle of Lime & Ginger Infused Vodka to a basket.

Then fill it with a couple of cocktail glasses, an ice cube mold, some fun swizzle sticks, a packet of fun cocktail napkins.

You could also include a card with a lime or ginger vodka cocktail recipe. 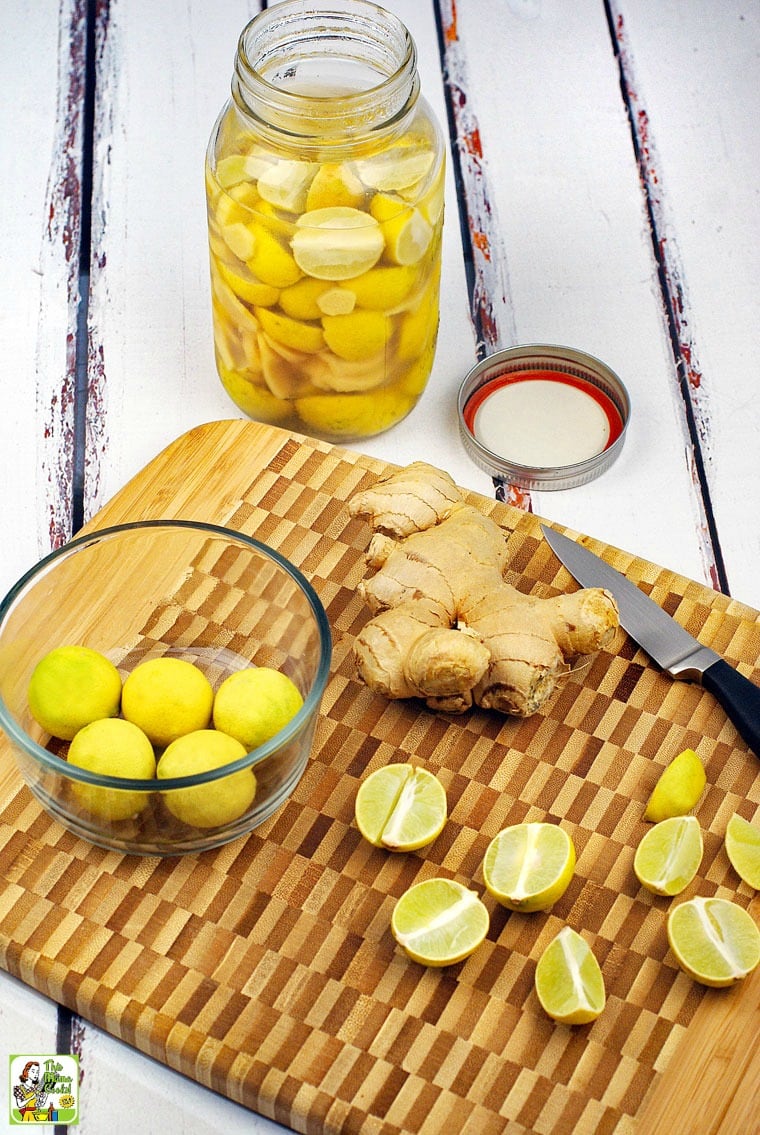 1. Add a couple of packets of powdered monk fruit sweetener to the infused vodka

2. Serve your cocktail over crushed ice.

You can also mix the Lime & Ginger Infused Vodka with another liquor, such as marshmallow vodka or rum. Yum!

Or you may want to add something to the homemade infused vodka to sweeten it up like a simple syrup or one of the sugar free vanilla coffee syrups.

Originally published on December 4, 2014. Updated with new pictures and information.