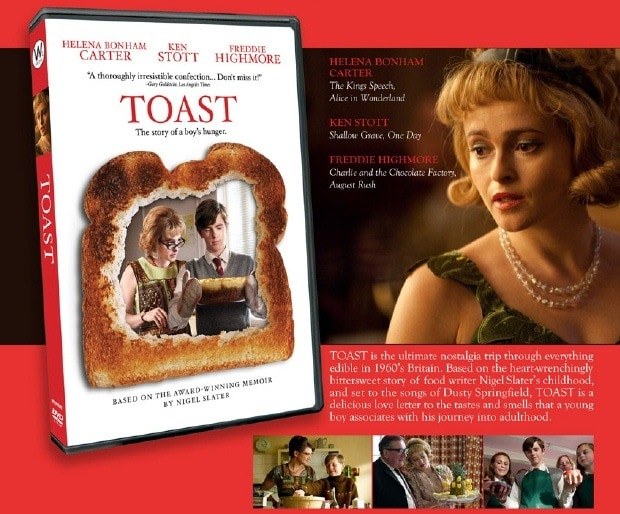 There hasn’t been a good foodie movie since Julie and Julia came out in 2009. (Well, that was half of a good foodie movie as the parts with the blogger Julie were annoying.) Now we have the movie, Toast: The Story of a Boy’s Hunger, based on food writer, Nigel Slater’s book of the same name. The movie just came out on DVD in the US – just in time to buy it with that Amazon gift card you got for Christmas or Hanukkah!

In Toast, we quickly learn that Nigel’s mum literally cannot cook – well just about everything but mince pies. Her idea of making dinner is taking canned food, placing the unopened cans in a pan of water, and boiling them until heated. Poor Nigel is starving for a decent meal (he doesn’t even like the milk at school), but at least has his mum’s love – and toast with butter – to sustain him.

Nigel’s mum passes away from severe asthma while he’s still young. Nigel and his distant, sad father bumble through trying to care of each other. Nigel attempts to fill the void by cooking dinner himself. Instead, he ends up with a very burnt dinner that his dad assures him is just fine. It’s rather touching.

Life changes for these two sad blokes when their new cleaner (housekeeper) Mrs. Potter, played by the wonderful Helena Bonham Carter, shows up. She’s dressed like a tart and has the amazing ability to make enticing and picture perfect tarts, cakes, pies, roasts, and British classics like Toad in the Hole. Her cooking goes straight to Nigel’s dad’s heart and he moves them all out to the country, so he can live in sin with Mrs. Potter and her fabulous cooking. There’s something to be said for the way to a man’s heart is through his stomach!

Meanwhile, Nigel discovers the Domestic Science (home ec) class at his new school and his talent for cooking. Nigel soon starts a culinary rivalry over scones and lemon meringue pie with Mrs. Potter for his dad’s affections. Instead, Mrs. Potter turns up the kitchen heat a notch until she literally feeds Nigel’s dad to death. Fortunately, with his parents gone, cooking serves as a way for Nigel to leave all the madness behind him and start his adult life.

Toast is a lovely snapshot of England in the ‘60s and a sweet, funny story. However, I almost feel much of it is lost on American audiences as Toast’s appeal is nostalgia for a lost time in British life. Still, if  you’re a food aficionado, you’ll enjoy Toast’s classic vintage food presentations while rooting for Nigel – and marveling at Mrs. Potter’s wicked kitchen skills. 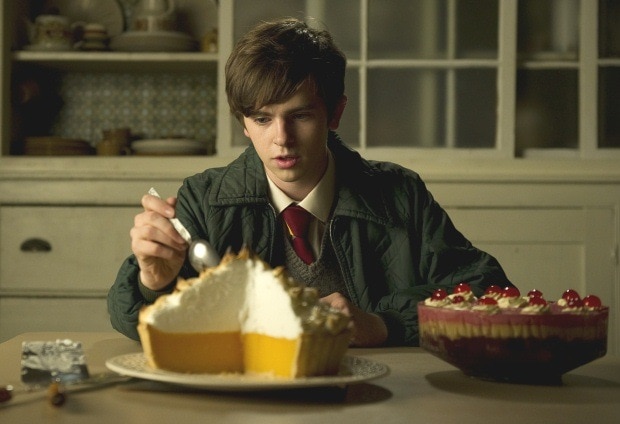 And now for a dessert recipe from Toast’s food stylist, Katharine Tidy. Read an interview with her to find how she made all those amazing movie food dishes at Q & A With Katherine Tidy: Buttering Up the Food Stylist From BBC Films Toast from the LA Weekly blog.

17 thoughts on “Toast: a movie review and a recipe for lemon meringue pie”