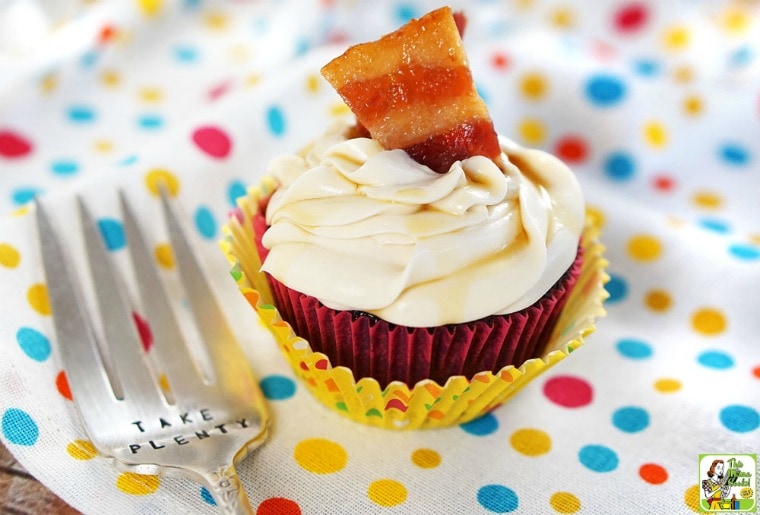 Want to make a batch of special gluten free cupcakes for a party? Something that’s so delicious that your guests won’t know they’re gluten free? Try these Chocolate Bacon Cupcakes!

The first time I made these gluten free bacon cupcakes was at a bacon themed party. Everyone – including my kids – loved how the cupcakes turned out.

No one thought bacon cupcakes were too weird or greasy.  They loved the flavor combinations I used in the bacon cupcake recipe, too – maple, bacon, brown sugar, and peach whiskey! 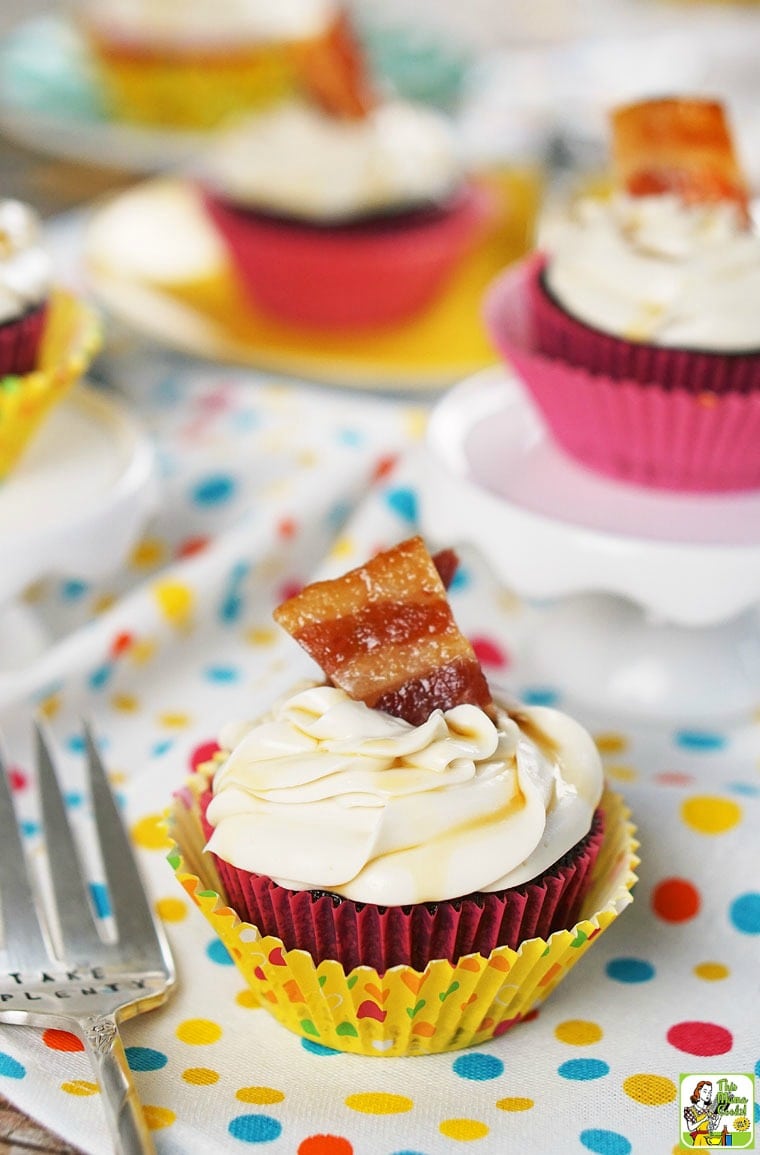 The first thing you’ll need to do for these gluten free cupcakes is to make a batch of candied bacon to mix into the batter and to use as a garnish.

I made candied bacon using Kevin at Closet Cooking’s method. However, I used twice as much maple syrup and brown sugar, because I wanted those flavors to come through.

Since these bacon cupcakes are made with a gluten free chocolate cake mix and canned frosting, they’re practically fuss free. So much easier than making cupcakes from scratch, too!

The way you “Cake Doctor” the cupcake mix is by adding peach whiskey, bacon grease, and chopped up pieces of candied bacon to it. (Trust me, it’ll be amazing.) If using bacon grease sounds too weird, feel free to use butter instead.

The vanilla frosting is customized with the addition of maple syrup and peach whiskey. Yum! (It’s hard not to sneak a few fingerfuls before frosting your gluten free cupcakes!) 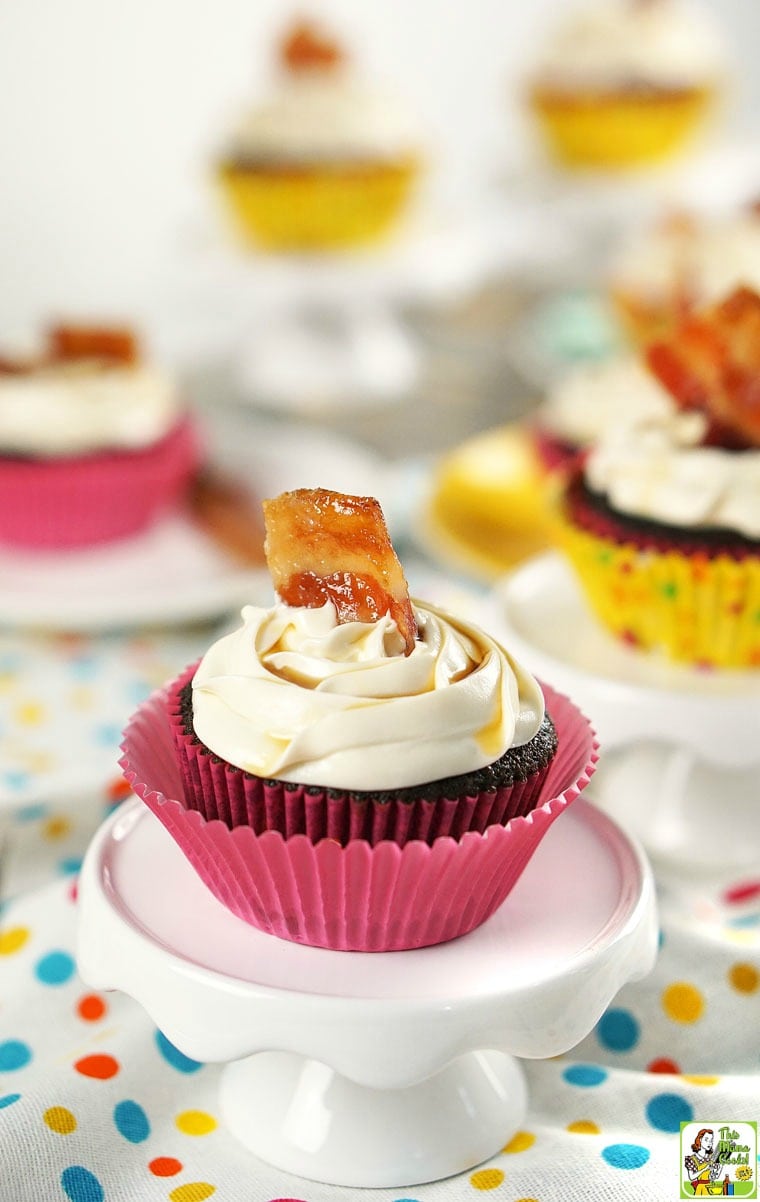 If you don’t have peach whiskey, bourbon is a good substitute. If you don’t drink alcohol, you can omit it. Just add another ounce of water or maple syrup when making the batter. For the frosting for these bacon cupcakes, just leave the whiskey or bourbon out.

I prefer real maple syrup over pancake syrup for this bacon cupcake recipe. I feel you’ll get more maple flavor from the real stuff.

Make sure the candied bacon you use for the garnish is crispy. I found mine wasn’t crispy enough and eventually folded over. (The candied bacon that goes into the Chocolate Bacon Cupcakes batter doesn’t need to be as crispy.)

To get extra crispy bacon for the garnish, put five or so bacon strips back in the oven to cook a bit longer. Make sure to keep on eye on the candied bacon so it doesn’t burn! 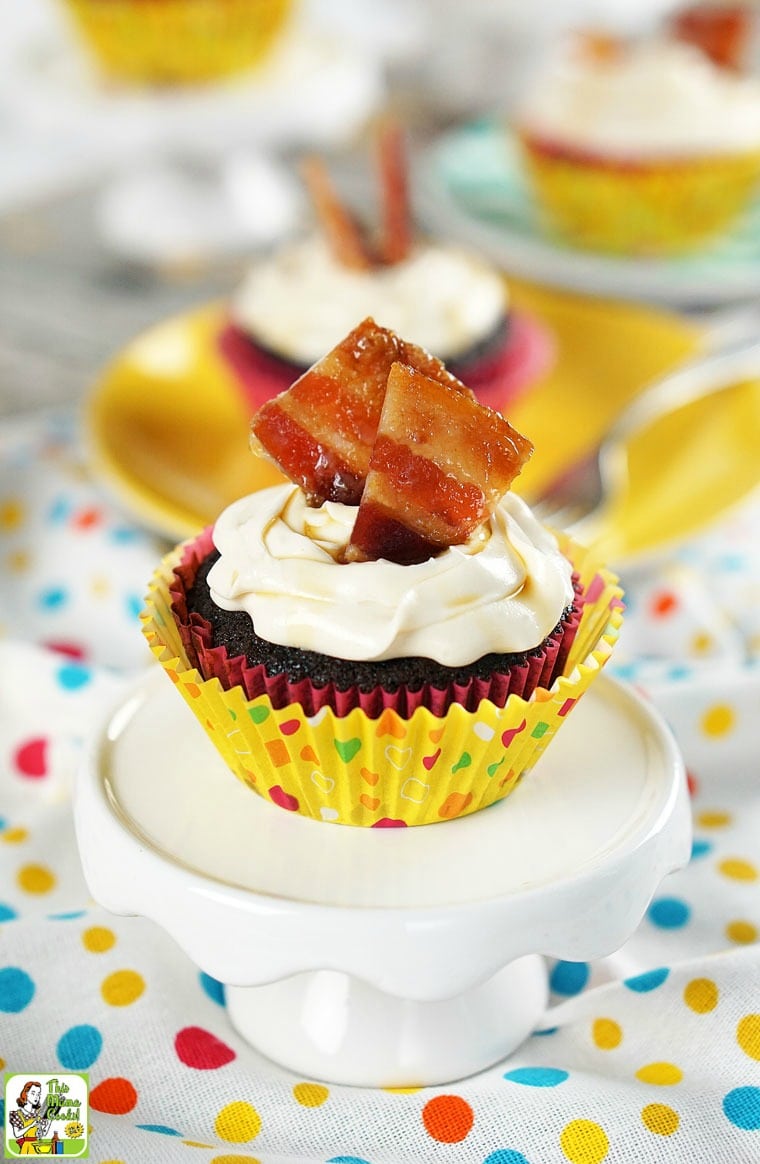 Don’t like how chocolate cupcakes show through the cupcake liner? You can use parchment liners, which are thicker but don’t come in decorative colors.

Or you can do what I do – bake in one liner and then place them in another liner before frosting the easy bacon cupcakes. I find this double lining is so pretty and you can have fun with matching liner colors to frosting or your party theme. 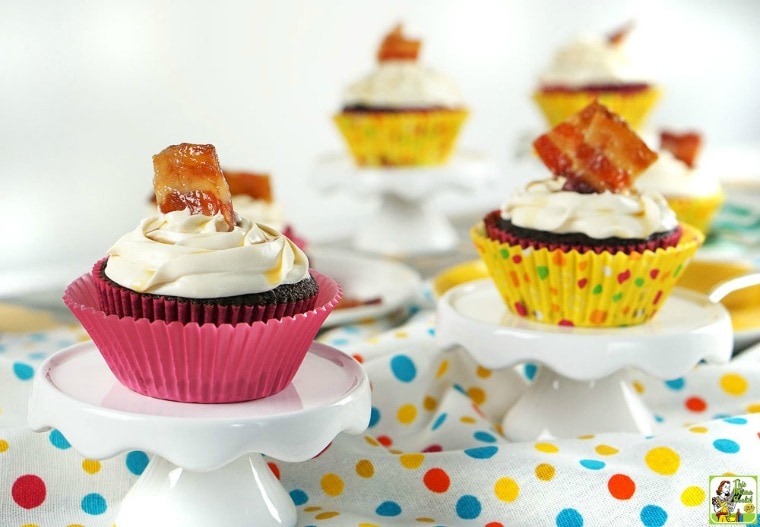 If it’s hot out and you’re taking your gluten free cupcakes to a party, place the Chocolate Bacon Cupcakes in the freezer for 30-45 minutes. This will help set the frosting and stop it from “melting” and losing its stiffness in the heat and humidity.

I also like cold cupcakes vs. room temperature cupcakes. I think the cold temperature makes these bacon cupcakes taste better.

Finally, don’t tell anyone that these Chocolate Bacon Cupcakes are gluten free – unless they’re on a gluten free diet. For some reason people think gluten free = yucky!

They won’t try something that’s gluten free even if you swear that it’s delicious. Oh well, more for me and my gluten free friends! 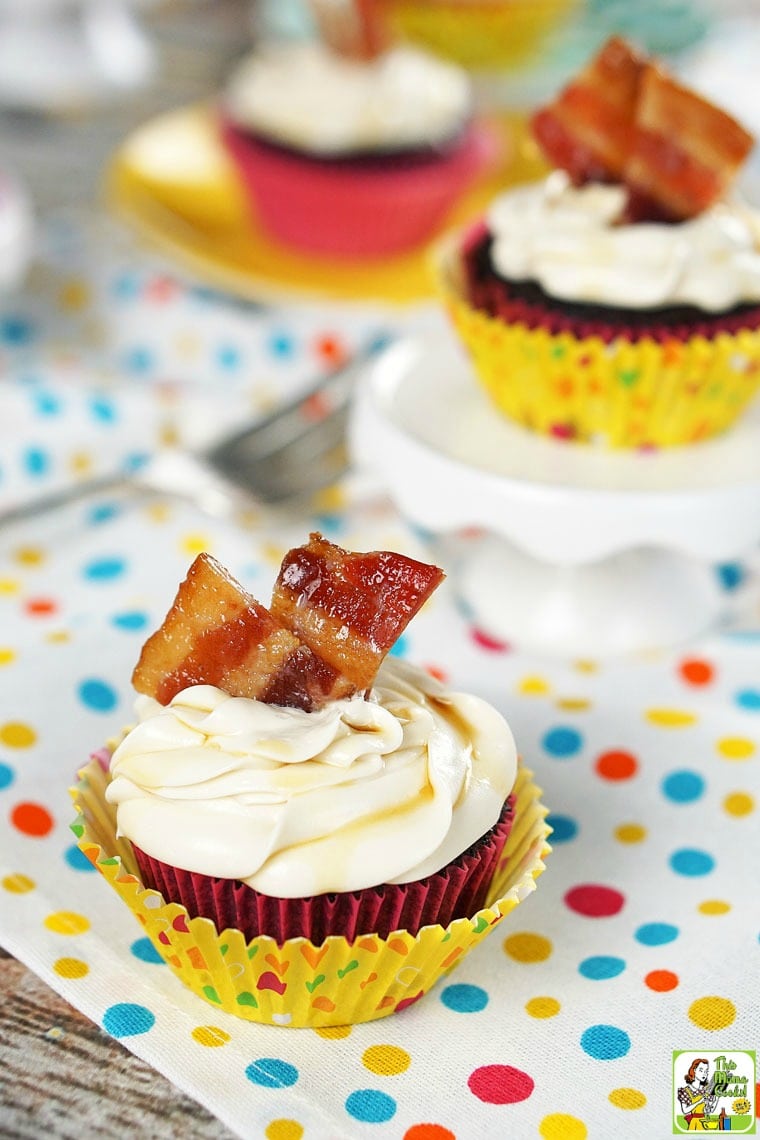 Here are some of my must have kitchen gadgets that help making cupcake recipes so much easier:

Originally published on July 25, 2016. Updated with new photos and information.